I wanted to be able to boot the Kano OS in a virtual machine so i could play hack minecraft with the kids and play along with the Kano OS desktop/games.  I was trying to avoid plugging a raspberry pi into an monitor to use and wanted to use it on my local laptop.

Well, not so easy. VirtualBox/VMware dont support ARM. However QEMU does.

This repo (https://github.com/dhruvvyas90/qemu-rpi-kernel/wiki/Emulating-Jessie-image-with-4.x.xx-kernel) had the recent raspberry pi kernels to use with QEMU.

If you follow the steps on that page with regards to mounting the image and editing /etc/ld.so.preload and /etc/fstab I was able to get the image to boot up successfully…slow as hell…but it technically was working.

command to boot with vnc: 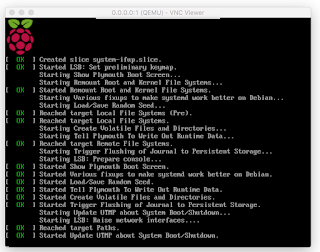 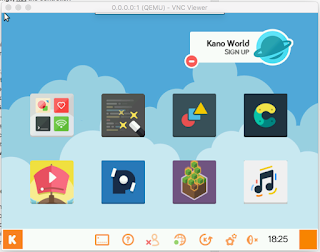 I was so horribly slow i don’t think this is feasible.  I am going to try using libvirt to make it better or just see if i can play hack minecraft another way.  If I get anywhere further with the project i’ll post an update.