Rootkits are dangerous pieces of malware. Once in place, they are usually really hard to detect. Their code is typically more challenging to write than other malware, so developers resort to code reuse from open source projects. As rootkits are very interesting to analyze, we are always looking out for these kinds of samples in the wild.

Adore-Ng is a relatively old, open-source, well-known kernel rootkit for Linux, which initially targeted kernel 2.x but is currently updated to target kernel 3.x. It enables hiding processes, files, and even the kernel module, making it harder to detect. It also allows authenticated user-mode processes to interact with the rootkit to control it, allowing the attacker to hide many custom malicious artifacts by using a single rootkit.

In early 2022, we were analyzing a rootkit mostly based on Adore-Ng that we found in the wild, apparently under development. After obtaining the sample, we examined the .modinfo section and noticed it is compiled for a specific kernel version.

As you may know, even if it is possible to ‘force load’ the module into the kernel by using the --force flag of the insmod Linux command, this operation can fail if the required symbols are not found in the kernel; this can often lead to a system crash.

We discovered that the kernel module could be successfully loaded without forcing into a default Centos 6.10 distribution, as the rootkit we found is compiled for a similar kernel version.

While looking at the file’s strings, we quickly identified the PgSD93ql hardcoded file name in the kernel rootkit to reference the payload. This payload file name is likely used to make it less obvious for the sysadmin, for instance, it can look like a legitimate PostgreSQL file.

Using this hardcoded file name, we extracted the file hidden by the rootkit. It is a compiled backdoor trojan written in C programming language; Avast’s antivirus engine detects and classifies this file as ELF:Rekoob – which is widely known as the Rekoobe malware family. Rekoobe is a piece of code implanted in legitimate servers. In this case it is embedded in a fake SMTP server, which spawns a shell when it receives a specially crafted command. In this post, we refer to this rootkit as Syslogk rootkit, due to how it ‘reveals’ itself when specially crafted data is written to the file /proc/syslogk .

The Syslogk rootkit is heavily based on Adore-Ng but incorporates new functionalities making the user-mode application and the kernel rootkit hard to detect.

To load the rootkit into kernel space, it is necessary to approximately match the kernel version used for compiling; it does not have to be strictly the same.

For example, we were able to load the rootkit without any effort in a Centos 6.10 virtual machine by using the insmod Linux command.

After loading it, you will notice that the malicious driver does not appear in the list of loaded kernel modules when using the lsmod command.

The rootkit has a hide_module function which uses the list_del function of the kernel API to remove the module from the linked list of kernel modules. Next, it also accordingly updates its internal module_hidden flag.

Fortunately, the rootkit has a functionality implemented in the proc_write function that exposes an interface in the /proc file system which reveals the rootkit when the value 1 is written into the file /proc/syslogk.

Once the rootkit is revealed, it is possible to remove it from memory using the rmmod Linux command. The Files section of this post has additional details that will be useful for programmatically uncloaking the rootkit.

Overview of the Syslogk rootkit features

Apart from hiding itself, making itself harder to detect when implanted, Syslogk can completely hide the malicious payload by taking the following actions:

We observed that the Syslogk rootkit (and Rekoobe payload) perfectly align when used covertly in conjunction with a fake SMTP server. Consider how stealthy this could be; a backdoor that does not load until some magic packets are sent to the machine. When queried, it appears to be a legitimate service hidden in memory, hidden on disk, remotely ‘magically’ executed, hidden on the network. Even if it is found during a network port scan, it still seems to be a legitimate SMTP server.

After adding writing permissions to the PTE, the rootkit can hook the functions declared in the hks internal rootkit structure.

The mechanism for placing the hooks consists of identifying the hookable kernel symbols via /proc/kallsyms as implemented in the get_symbol_address function of the rootkit (code reused from this repository). After getting the address of the symbol, the Syslogk rootkit uses the udis86 project for hooking the function.

The Virtual File System (VFS) is an abstraction layer that allows for FS-like operation over something that is typically not a traditional FS. As it is the entry point for all the File System queries, it is a good candidate for the rootkits to hook.

It is not surprising that the Syslogk rootkit hooks the VFS functions for hiding the Rekoobe payload stored in the file /etc/rc-Zobk0jpi/PgSD93ql .

The hook is done by hk_root_readdir which calls to nw_root_filldir where the directory filtering takes place.

As you can see, any directory containing the substring -Zobk0jpi will be hidden.

The function hk_get_vfs opens the root of the file system by using filp_open. This kernel function returns a pointer to the structure file, which contains a file_operations structure called f_op that finally stores the readdir function hooked via hk_root_readdir.

Of course, this feature is not new at all. You can check the source code of Adore-Ng and see how it is implemented on your own. 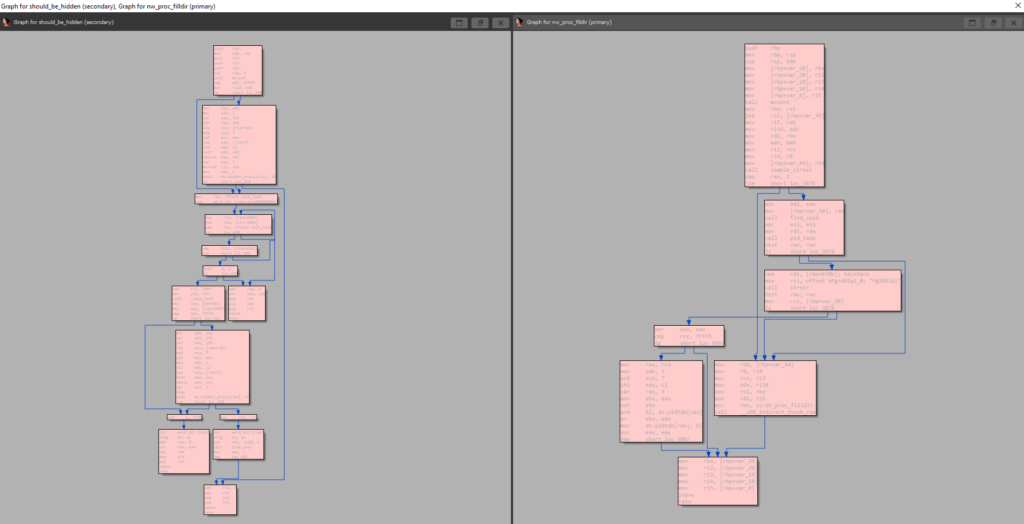 The Syslogk rootkit function hk_getpr explained above, is a mix of adore_find_task and should_be_hidden functions but it uses the same mechanism for hiding processes.

The Adore-Ng rootkit allows hiding a given set of listening services from Linux programs like Netstat. It uses the exported proc_net structure to change the tcp4_seq_show( ) handler, which is invoked by the kernel when Netstat queries for listening connections. Within the adore_tcp4_seq_show() function, strnstr( ) is used to look in seq->buf for a substring that contains the hexadecimal representation of the port it is trying to hide. If this is found, the string is deleted. 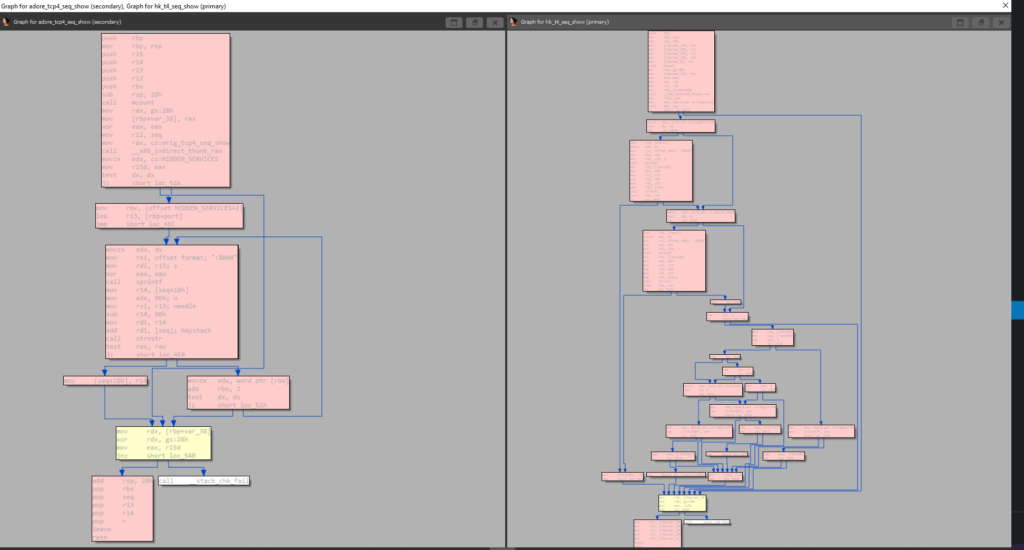 In this way, the backdoor will not appear when listing the connections in an infected machine. The following section describes other interesting capabilities of this rootkit.

Instead of continuously running the payload, it is remotely started or stopped on demand by sending specially crafted network traffic packets.

These are known as magic packets because they have a special format and special powers. In this implementation, an attacker can trigger actions without having a listening port in the infected machine such that the commands are, in some way, ‘magically’ executed in the system.

The magic packet inspected by the Syslogk rootkit for starting the Rekoobe fake SMTP server is straightforward. First, it checks whether the packet is a TCP packet and, in that case, it also checks the source port, which is expected to be 59318.

Rekobee will be executed by the rootkit if the magic packet fits the mentioned criteria. 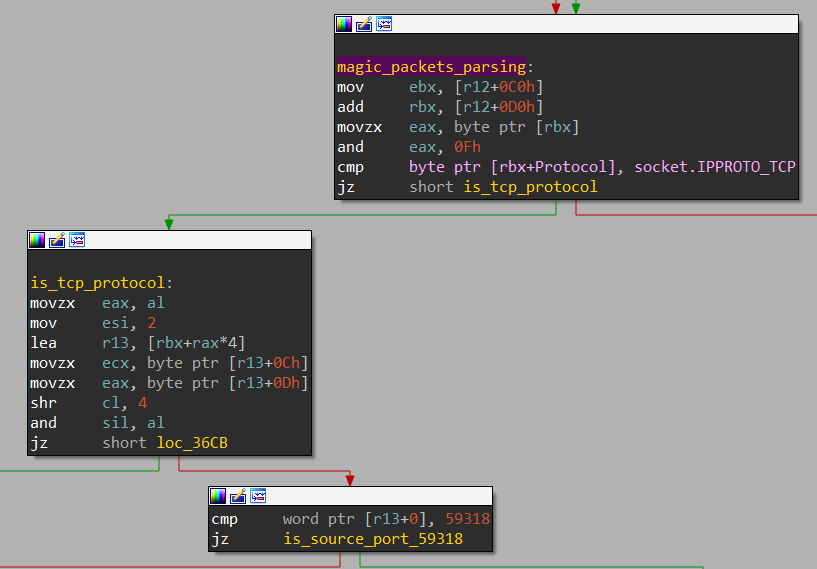 Of course, before executing the fake service, the rootkit terminates all existing instances of the program by calling the rootkit function pkill_clone_0. This function contains the hardcoded process name PgSD93ql;  it only kills the Rekoobe process by sending the KILL signal via send_sig.

The Files section of this post demonstrates how to manually craft (using Python) the TCP magic packet for starting the Rekoobe payload.

In the next section we describe a more complex form of the magic packet.

Since the attacker doesn’t want any other person in the network to be able to kill Rekoobe, the magic packet for killing Rekoobe must match some fields in the previous magic packet used for starting Rekoobe. Additionally, the packet must satisfy additional requirements – it must contain a key that is hardcoded in the rootkit and located in a variable offset of the magic packet. The conditions that are checked:

The offset of the hardcoded key is also set in the packet and not in a hardcoded offset; it is calculated instead. To be more precise, it is set in the data offset byte (TCP header) such that after shifting the byte 4 bits to the right and multiplying it by 4, it points to the offset of where the Key is expected to be (as shown in the following screenshot, notice that the rootkit compares the Key in reverse order).

In our experiments, we used the value 0x50 for the data offset (TCP header) because after shifting it 4 bits, you get 5 which multiplied by 4 is equal to 20. Since 20 is precisely the size of the TCP Header, by using this value, we were able to put the key at the start of the data section of the packet.

If you are curious about how we implemented this magic packet from scratch, then please see the Files section of this blog post.

When the infected machine receives the appropriate magic packet, the rootkit starts the hidden Rekoobe malware in user mode space.

It looks like an innocent SMTP server, but there is a backdoor command on it that can be executed when handling the starttls command. In a legitimate service, this command is sent by the client to the server to advise that it wants to start TLS negotiation.

For triggering the Rekoobe backdoor command (spawning a shell), the attacker must send the byte 0x03 via TLS, followed by a Tag Length Value (TLV) encoded data. Here, the tag is the symbol %, the length is specified in four numeric characters, and the value (notice that the length and value are arbitrary but can not be zero).

Additionally, to establish the TLS connection, you will need the certificate embedded in Rekoobe.

See the Files section below for the certificate and a Python script we developed to connect with Rekoobe.

The origin of Rekoobe payload and Syslogk rootkit

Rekoobe is clearly based on the TinySHell open source project; this is based on ordering observed in character and variables assignment taking place in the same order multiple times.

On the other hand, if you take a look at the Syslogk rootkit, even if it is new, you will notice that there are also references to TinySHell dating back to December 13, 2018.

The evidence suggests that the threat actor developed Rekoobe and Syslogk to run them  together. We are pleased to say that our users are protected and hope that this research assists others.

One of the architectural advantages of security software is that it usually has components running in different privilege levels; malware running on less-privileged levels cannot easily interfere with processes running on higher privilege levels, thus allowing more straightforward dealing with malware.

On the other hand, kernel rootkits can be hard to detect and remove because these pieces of malware run in a privileged layer. This is why it is essential for system administrators and security companies to be aware of this kind of malware and write protections for their users as soon as possible.

The Syslogk and Rekoobe rootkit research tools and IoCs are in our IoC repository.