Lightning Framework is a new undetected Swiss Army Knife-like Linux malware that has modular plugins and the ability to install rootkits.

Year after year Linux environments increasingly become the target of malware due to continued threat actor interest in the space. Malware targeting Linux environments surged in 2021, with a large amount of innovation resulting in new malicious code, especially in ransomwares, trojans, and botnets. With the rise in use of the cloud, it is no wonder that malware innovation is still accelerating at breakneck speed in this realm.

This is a technical analysis of a previously undocumented and undetected Linux threat called the Lightning Framework. It is rare to see such an intricate framework developed for targeting Linux systems. Lightning is a modular framework we discovered that has a plethora of capabilities, and the ability to install multiple types of rootkit, as well as the capability to run plugins. The framework has both passive and active capabilities for communication with the threat actor, including opening up SSH on an infected machine, and a polymorphic malleable command and control configuration. We are releasing this blog for informational purposes. We do not have all the files that are referenced in the framework, but hope that this release will help others if they possess other pieces of the jigsaw puzzle. We have not observed this malware being used in attacks in the wild.

The framework consists of a downloader and core module, with a number of plugins. Some of the plugins used by the malware are open-source tools. Below is a figure of the framework layout:

Overview of the Modules

The main function of the downloader module is to fetch the other components and execute the core module.

The downloader module starts by checking if it is located in the working directory /usr/lib64/seahorses/ under the name kbioset. The framework makes heavy use of typosquatting and masquerading in order to remain undetected. The reference to seahorses masquerades the password and key manager software seahorse. If not it will relocate itself to that working directory and execute that copy. The downloader will fingerprint the host name and network adapters to generate a GUID, which will be sent to the command and control (C2) server. 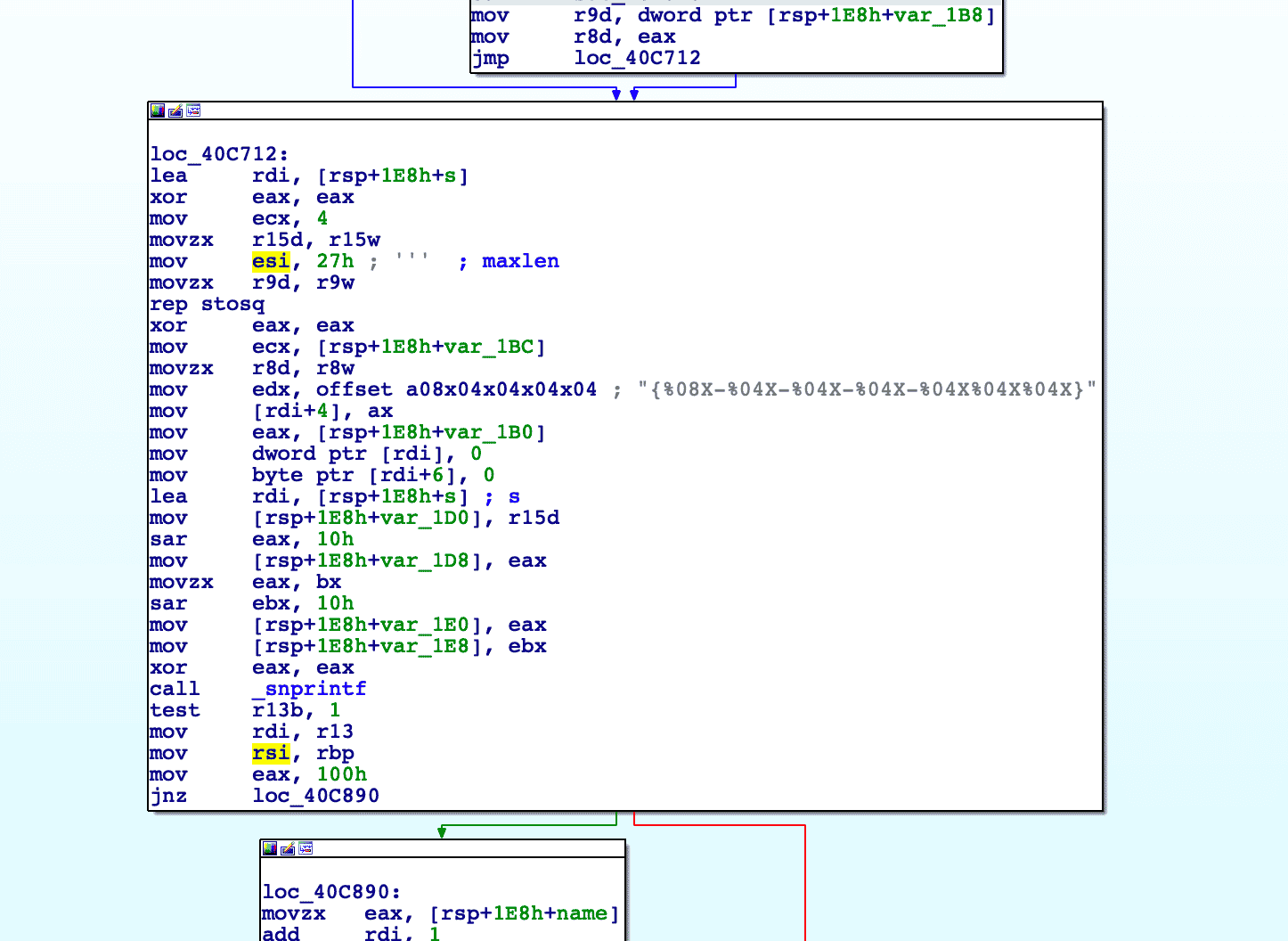 The downloader will then contact the C2 to fetch the following modules and plugins: 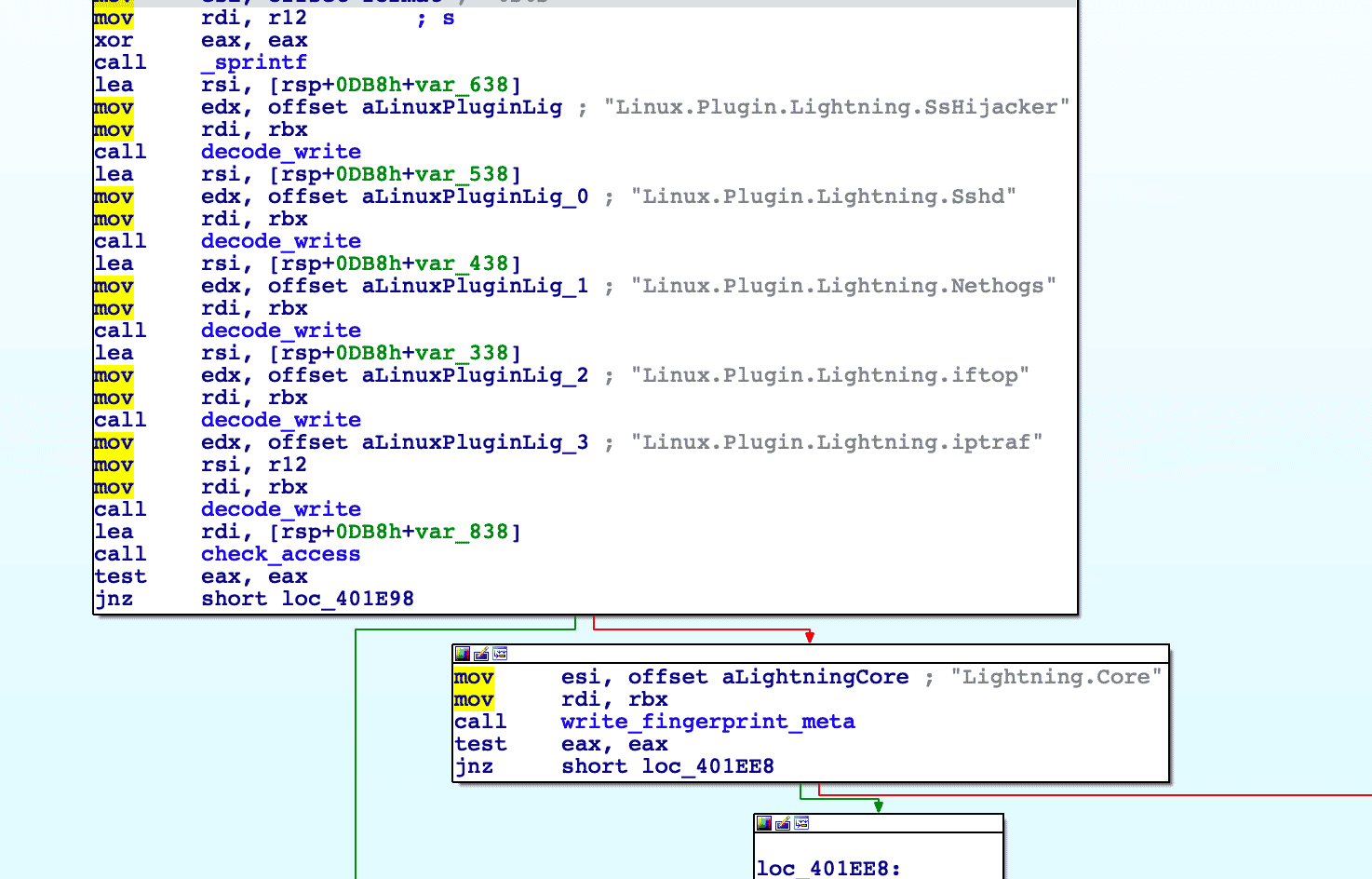 Resources fetched from the C2

The method of contacting the C2 will be described below in the malleable C2 section (click here to jump to that section). The downloader will then execute the core module (kkdmflush). 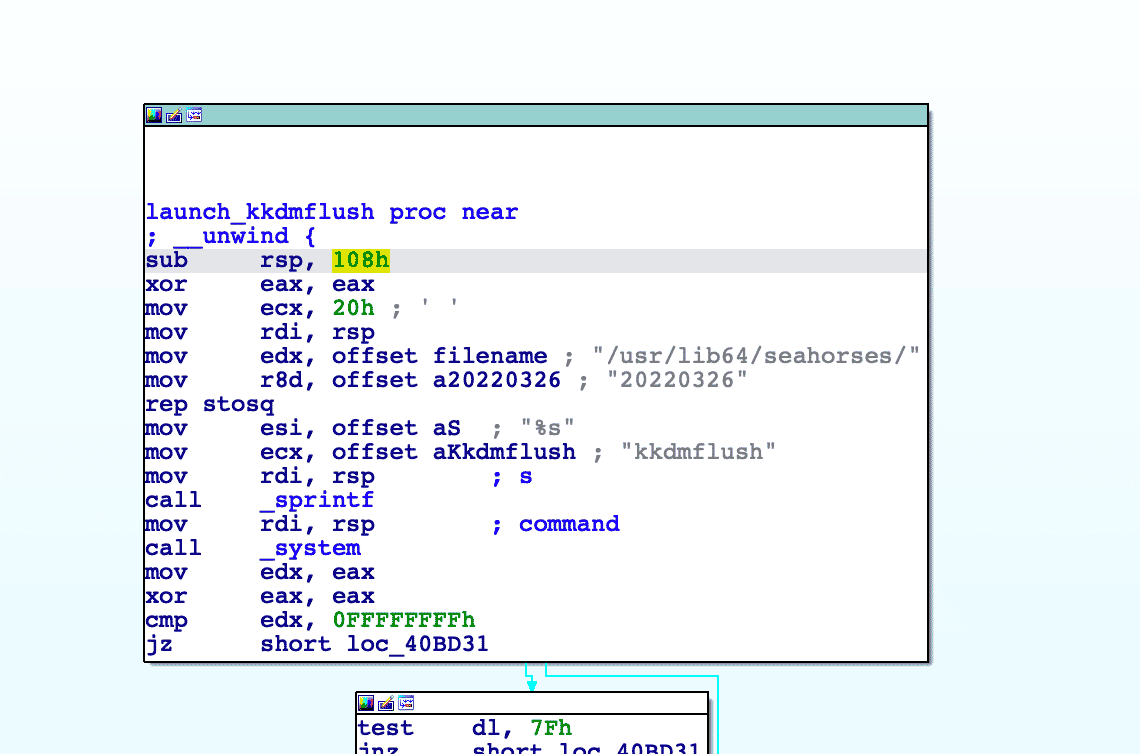 Execution of the core module

The core module is the main module in this framework, it is able to receive commands from the C2 and execute the plugin modules. The module has many capabilities and uses a number of techniques to hide artifacts to remain running under the radar.

The core module modifies the name of the calling thread of the module to kdmflush, to make it appear that it is a kernel thread. 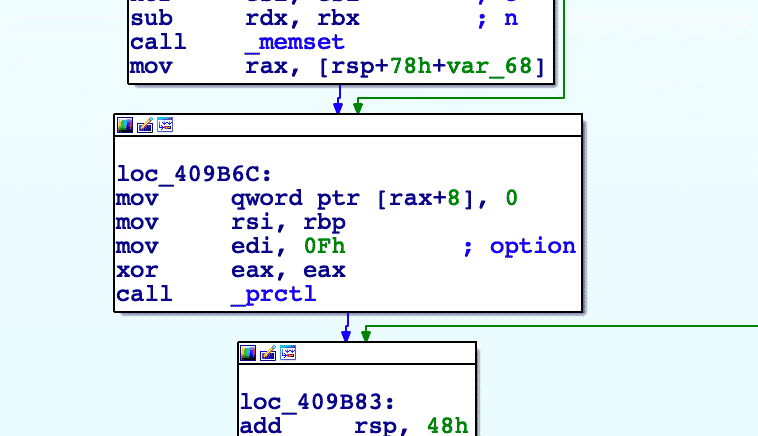 Next the core module sets up persistence by creating a script that is executed upon system boot. This is achieved by first creating a file located at /etc/rc.d/init.d/elastisearch. The name appears to typosquat elasticsearch. The following contents are written to the file:

This script will execute the downloader module upon boot. The service is then added using the chkconfig utility. 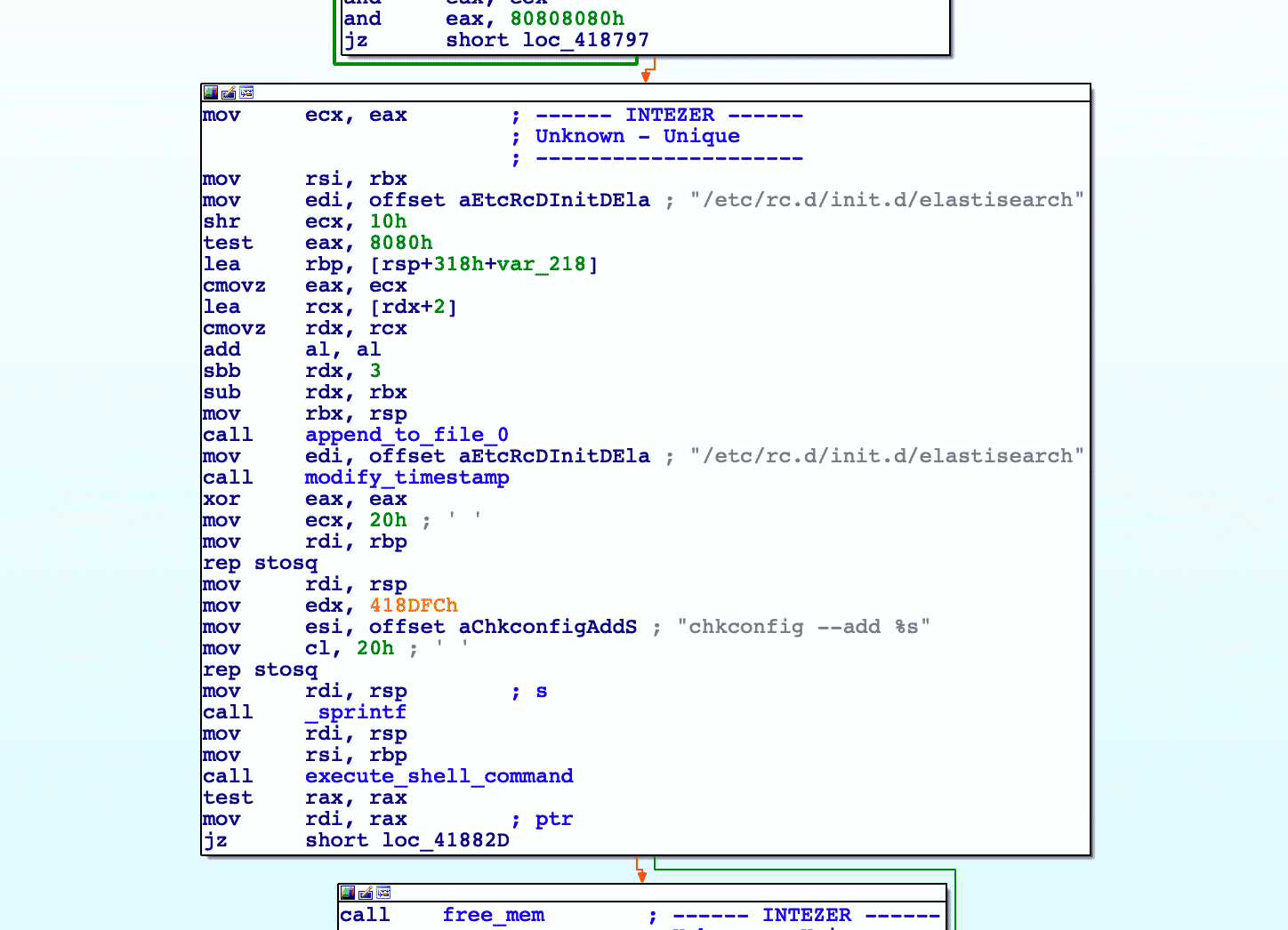 Creation of the init.d script and service

The timestamp of the file is modified to hide artifacts, a technique known as “timestomping”. The file has its last modified time edited to match that of either whoami, find, or su. It will look for each file respectively until it finds one. This technique is used for most of the files that the framework creates. 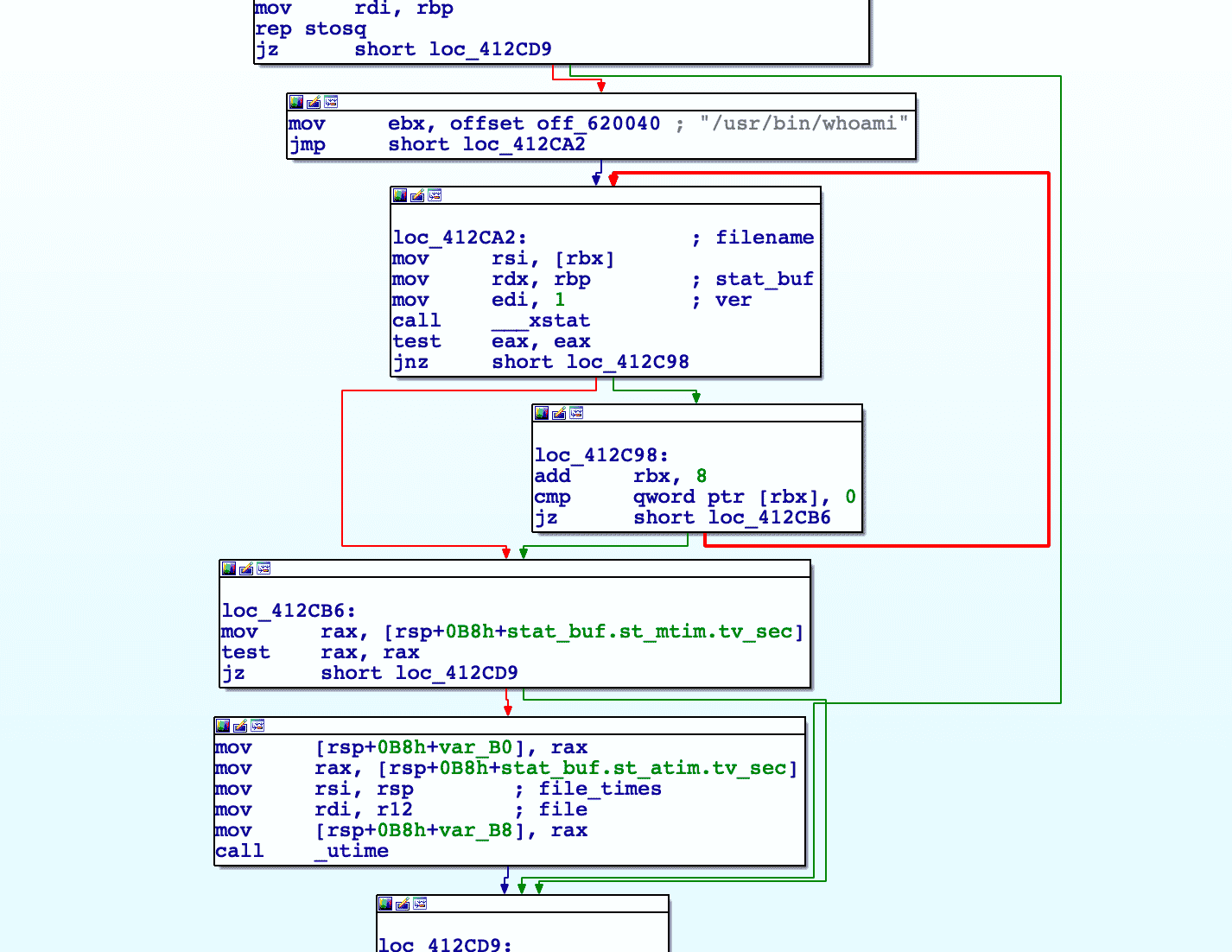 The malware will attempt to hide its Process ID (PID) and any related network ports. This is achieved by writing the frameworks running PIDs to two files: hpi and hpo. These files are parsed and then the existence of the file proc/y.y is checked. If the file exists, it means that a rootkit has been installed. The PIDs are written to proc/y.y for use by the rootkit, which may scrub any reference to files running in the framework from commands such as ps and netstat. 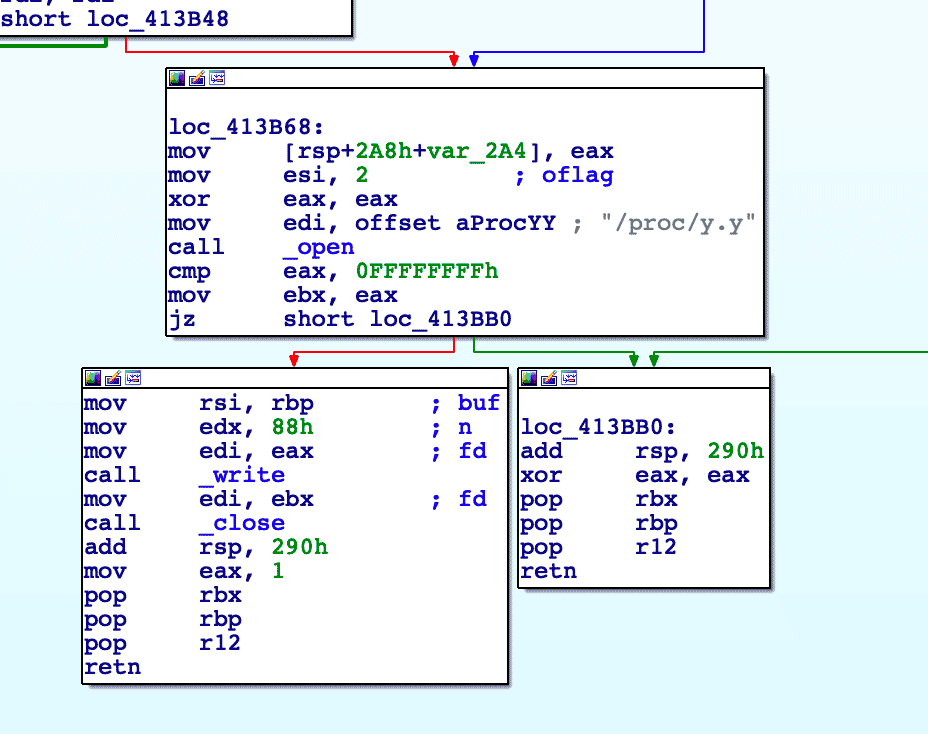 Writing PID to proc/y.y if it exists (Indication that rootkit exists)

The core module will generate a GUID in the same manner as the downloader and contact the C2. The response is parsed and the command is executed. The core module has the following commands:

Network communication in the Core and Downloader modules are performed over TCP sockets. The data is structured in JSON. The C2 is stored in a polymorphic encoded configuration file that is unique for every single creation. This means that configuration files will not be able to be detected through techniques such as hashes. The key is built into the start of the encoded file. 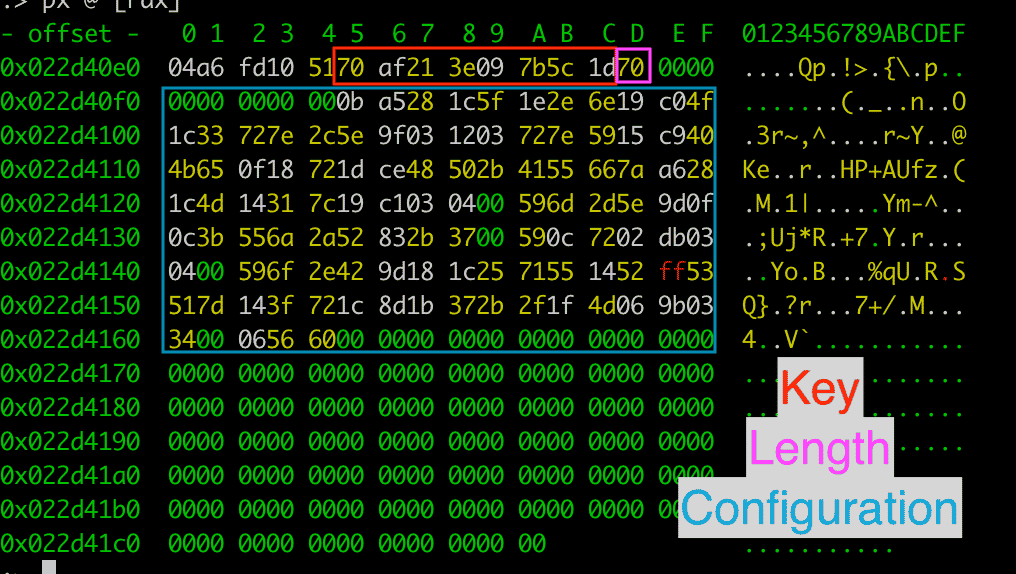 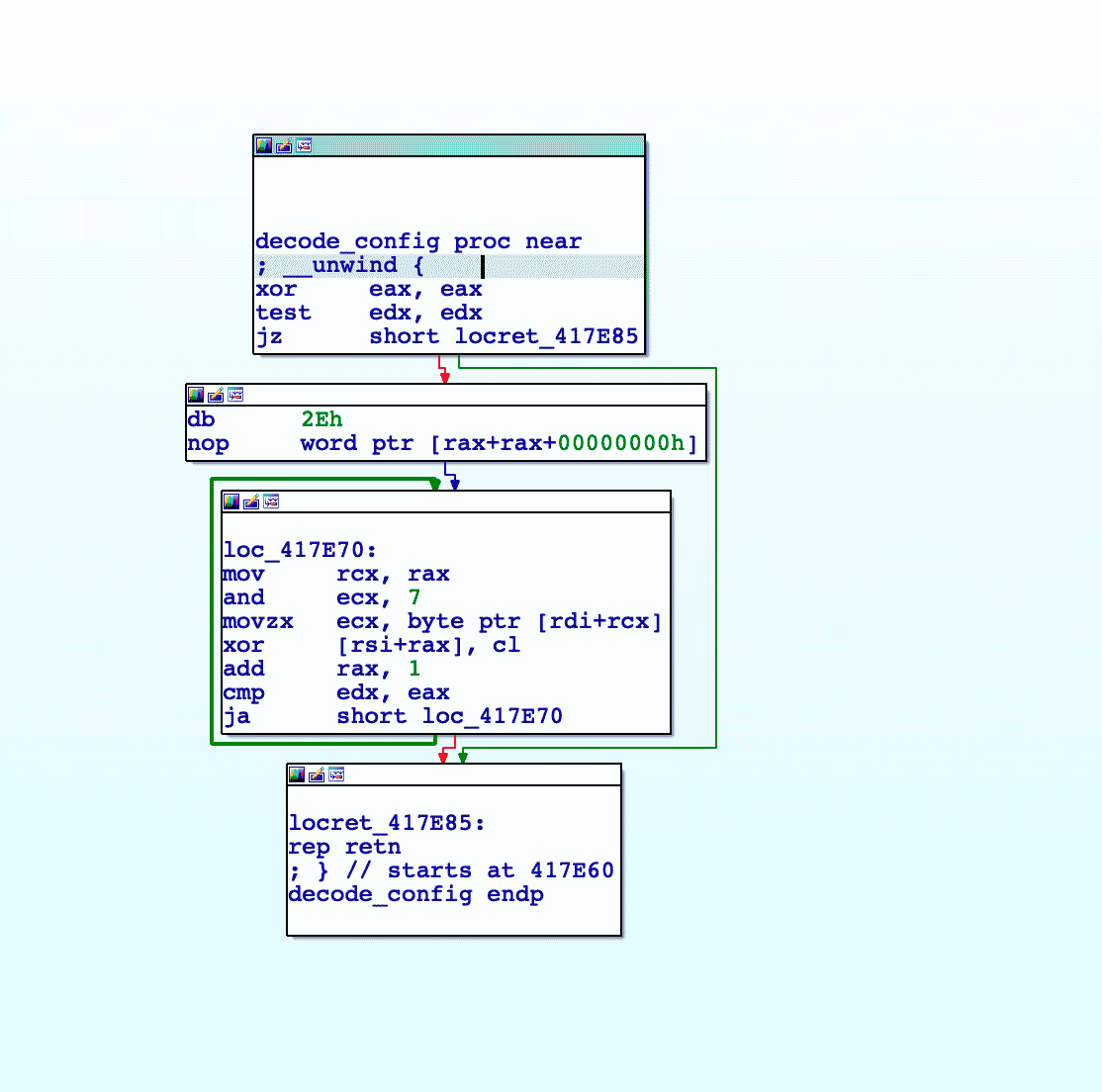 The decoded configuration is structured in JSON. The default configuration in the analyzed sample uses a local IP address 10.2.22[.]67 with the port 33229.

There is a passive mode of communication available if the actor executes the RunShellPure command. This starts an SSH service on the infected machine with the Linux.Plugin.Lightning.Sshd plugin. The plugin is an OpenSSH daemon that has hardcoded private and host keys, allowing the attacker to SSH into the machine with their own SSH key, creating a secondary backdoor. 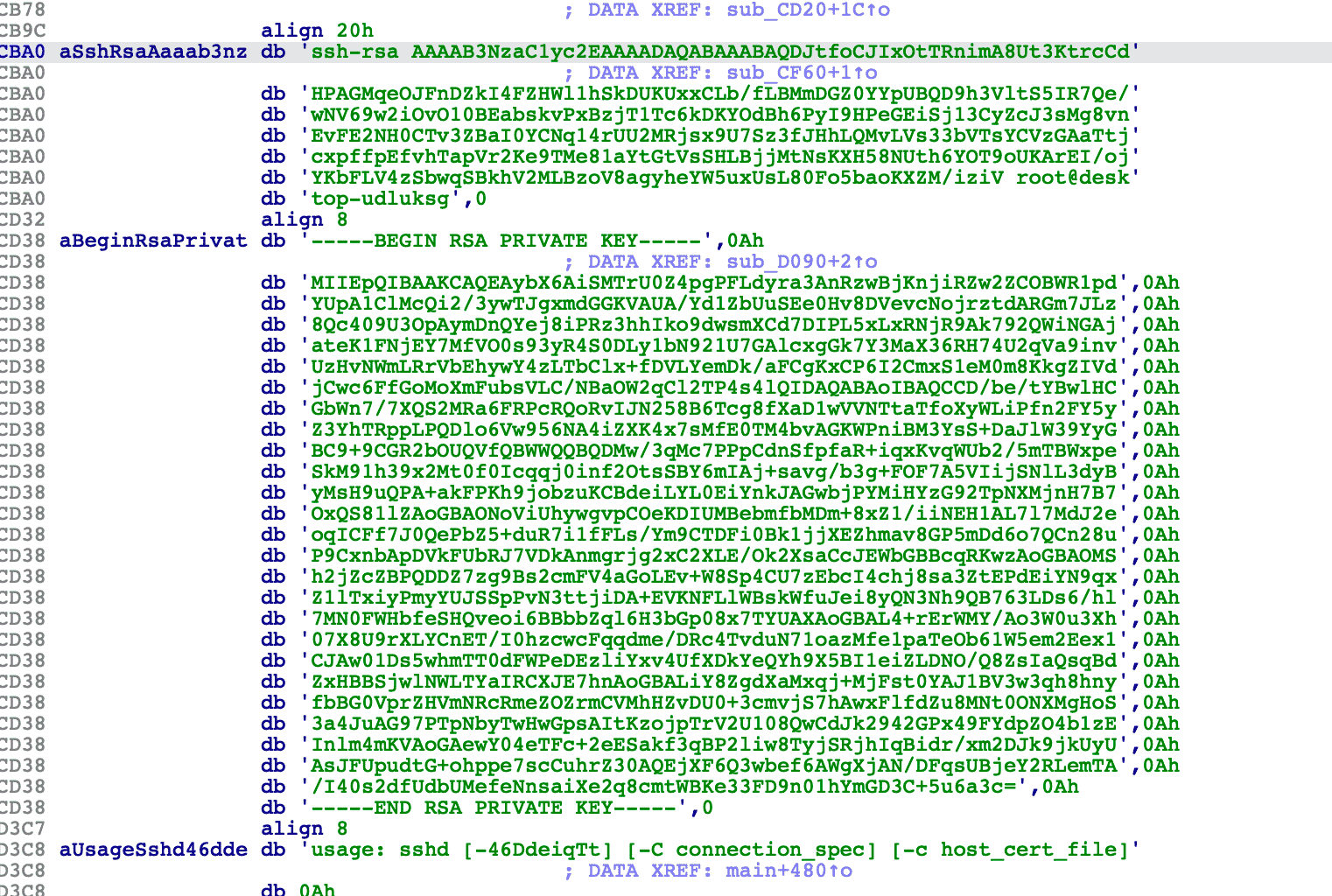 The Lightning Framework is an interesting malware as it is not common to see such a large framework developed for targeting Linux. Although we do not have all the files, we can infer some of the missing functionality based on strings and code of the modules that we do possess. Soon we will release a another blog about detection opportunities for Lightning Framework using osquery.

We would like to extend a huge thanks to our friends and partners at IBM and SentinelOne for their help during investigating this threat.