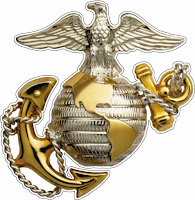 I thought today of all days would be a good time to break from tradition and share a post that has nothing to do with DFIR or Windows, one that isn't technical, nor related to computers.

Some of you may be aware that once, in a galaxy far, far away, I was a Marine officer.  I was commissioned out of college, and served for a total of eight years.  During that time, I attended some interesting birthday ball events.

There was the year that I was the commander of the cake detail, in charge three other Marines as we escorted the "cake" to the proper location in the ballroom. The guest of honor, and the oldest Marine in the room, was PX Kelley.  The youngest Marine was a 2ndLt on the cake detail.  That's the year that I learned a little secret, that the 'cake' isn't really cake. The vast majority of what looks like a cake is actually plywood decorated with icing.  For the 'cake' we were escorting, the second tier of the 'cake' was ringed with small USMC flags, with a small US flag marking the left and right borders of what was actually cake.

There was the year when, for some reason, the birthday ball venue included a stage, and a ramp was constructed for the cake detail to escort the cake up to the stage for the ceremony.  I'm sure that the detail practiced moving a gurney but apparently they did so without an actual cake, because when the detail got to the top of the ramp during the ceremony, the two lead Marines realized that they needed to actually lift the cake, as there was a lip at the top of the ramp.  When they did so, the gurney beneath the cake was freed, and rolled back down the ramp.  Much hilarity ensued as the two trailing Marines, being downhill, realized that they weren't going to be holding the cake for long.  Fortunately, several Marines in the audience jumped into action and rescued the detail.

There was the year when the commanding general droned on and on, as general officers are want to do. In fact, the general went on for so long that several Marines in the ceremony (who apparently had 'celebrated' prior the ceremony) began passing out.  One of the senior Marines, who was later my boss, passed out...twice.  He was caught the first time, before he completely pitched over, and took a seat for a few minutes at a table.  Then he got up, got back into the formation, went to the position of attention, and apparently locked his knees again, because within seconds he began pitching back and forth.  After the first instance, those of us seating at tables near the ceremony set up "fields of fire" and began watching those in the ceremony closely, looking for eyes rolling back, knees buckling, etc.

However, the most memorable birthday ball occurred in Nov, 1990, as units that had participated in Operation Valiant Blitz returned to Okinawa from Pohang, South Korea.  I was temporarily assigned to the USS Duluth as the billeting officer, and was responsible for the billeting of 217 Marines, as well as several officers and staff NCOs.  On 10 Nov 1990, at 23:45, the ship's platoon assembled in the mess for mid-rats and the birthday celebration. The Navy cooks had made a big sheet cake, that apparently had been subject to the rolling of the ocean; one end of the cake had about an inch of cake, and an inch of icing, while the other end had two inches of cake and just the slightest layer of icing.  For most of the young Marines on board, I don't think it mattered...and I hope that the those 18- and 19-year-olds who were there realized that they were part of a tradition reaching back more than 200 years.

So, to all past, present, and future Marines...Happy Birthday!