Go malware on the rise

The Go programming language is becoming more and more popular. One of the reasons being that Go programs can be compiled for multiple operating systems and architectures in a single binary self containing all needed dependencies. Based on these properties, and as we expected, we observed an increase in the number of malware and gray tools written in Go programming language in the last months. We are discovering new samples weekly.

For instance, in late April, we discovered two new strains in our internal honeypots, namely Backdoorit and Caligula, both of which were at that time undetected on VT. 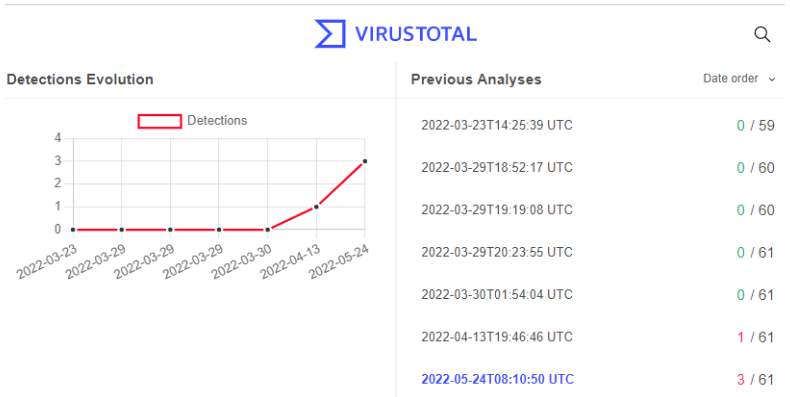 Both of these malware strains are multiplatform bots compiled for many different processor architectures and written in the Go programming language.

Backdoorit (version 1.1.51562578125) is a multiplatform RAT written in Go programming language and supporting both Windows and Linux/Unix operating systems. In many places in the code it’s also referred to as backd00rit.

Based on the close inspection of the analyse-full command of Backdoorit, we concluded that the main purpose of this malware is stealing Minecraft related files, Visual Studio and Intellij projects.

But the malware is not limited just to those files. Some commands (upload, basharchive, bashupload and so on) allow it to steal arbitrary files and information, install other malware in the system or run arbitrary commands (run, run-binary, etc.) and take screenshots of the user activity (screenshot, ssfile and so on).

Evidence indicates that the Backdoorit developer is not a native English speaker, further pointing to a possible Russian threat actor. The comments and strings in the code are mostly written in English but often grammatically incorrect. For instance, we found the message: “An confirmation required, run ”. We also discovered some isolated strings written in the Russian language.

In addition to the aforementioned strings we also observed that, amongst others, the VimeWorld files (a Russian project that offers Minecraft servers) are being targeted. This further leads us to believe the Russian origin of the threat actor behind this malware.

After running Backdoorit the RAT retrieves some basic environment information such as the current operating system and the name of the user. It then continuously tries to connect to a C&C server to give the attacker access to a shell.

The malware logs all executed operations and taken steps via a set of backd00r1t_logging_* functions. Those logs can be uploaded to the server of the attacker either by using uploadlogs and uploadlogs-file shell commands or automatically in case a Go panic exception is raised.

In such case backd00r1t_backdoor_handlePanic handles the exception and performs the following actions:

The mentioned handler helps to keep the bot connected and also allows the attacker to remotely follow the execution trace.

The shell allows the threat actor to remotely execute arbitrary commands. The first command that is likely to be run is the analyse-full command because it generates a report.txt file containing the Desktop, Documents, Downloads, Minecraft and VimeWorld folder file trees and uploads the mentioned report and both Visual Studio and IntelliJ projects folders contents, to Bashupload, a web service allowing to upload files from command line with a storage limitation of 50GB.

As mentioned earlier, if the attacker chooses to do so, he/she will be also able to implant other malware in the system. The threat actor can use the commands: run-binary (a command for downloading and executing a script), shell (a command allowing to spawn the operating system shell and execute arbitrary commands) or other available commands.

The malware also contains a sort of a “kill-switch” that can be triggered by the exploit command, but in this case this does not simply remove the malware itself, but has the ability to crash the Windows operating system by exploiting CVE-2021-24098 and also corrupt the NTFS of the hard disk via CVE-2021-28312 on vulnerable systems. This leads to complete loss of file information (including size, time and date stamps, permissions and data content) as well as, of course, removing evidence of the infection.

There are many more commands implemented in the shell that you can check at the corresponding section of the Appendix. As you will notice, the malware incorporates a checkupdates command so we may expect to see new versions of Backdoorit soon.

It currently supports Linux and Windows platforms via WSL and uses the function os_user_Current for determining the underlying operating system.

Caligula is based on the Hellabot open source project, an easily modifiable event based IRC bot with the ability to be updated without losing connection to the server.

Of course, more code reuse was found in the Caligula coming from open source projects (log15, fd, go-shellwords, go-isatty and go-colorable) but the core functionality is based on Hellabot.

All the samples that we hunted in the wild are prepared to connect to the same hardcoded IRC channel by using the following data:

As shown in the following screenshot, the bot is prepared for joining the Caligula IRC Net v1.0.0 botnet.

Caligula IRC Net v1.0.0 is a botnet ready for flooding. The bots offers to the attacker the following attacks:

For more information on how Caligula bot source code is organized, check the source code file listing available in the appendix. It can be useful for getting a high level perspective on the malware design, notice that new attack methods can be easily added to it and identify the Caligula malware family.

Due to its native multiplatform support and relative ease of development, the use of Go programming language for malicious purposes is currently growing, especially in malware targeting Unix/Linux operating systems.

Naturally with the growing interest and community around the Go programming language, some of the malicious tools are being open sourced on Github and resued by different threat actors.

In this instance, we were one of the firsts in hunting and detecting Backdoorit and Caligula.

The complete Backdoorit and Caligula IoCs are in our IoC repository.

The post Go malware on the rise appeared first on Avast Threat Labs.