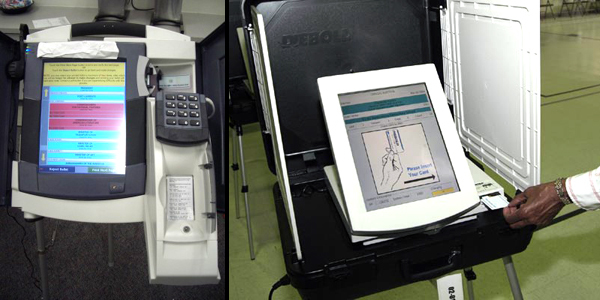 To understand why many computer scientists and voting rights advocates don't trust the security of many US election systems, consider the experience of Georgia-based researcher Logan Lamb. Last August, after the FBI reported hackers were probing voter registration systems in more than a dozen states, Lamb decided to assess the security of voting systems in his state.

According to a detailed report published Tuesday in Politico, Lamb wrote a simple script that would pull documents off the website of Kennesaw State University’s Center for Election Systems, which under contract with Georgia, tests and programs voting machines for the entire state. By accident, Lamb's script uncovered a breach whose scope should concern both Republicans and Democrats alike. Reporter Kim Zetter writes:

Within the mother lode Lamb found on the center’s website was a database containing registration records for the state’s 6.7 million voters; multiple PDFs with instructions and passwords for election workers to sign in to a central server on Election Day; and software files for the state’s ExpressPoll pollbooks — electronic devices used by poll workers to verify that a voter is registered before allowing them to cast a ballot. There also appeared to be databases for the so-called GEMS servers. These Global Election Management Systems are used to prepare paper and electronic ballots, tabulate votes and produce summaries of vote totals.

The files were supposed to be behind a password-protected firewall, but the center had misconfigured its server so they were accessible to anyone, according to Lamb. “You could just go to the root of where they were hosting all the files and just download everything without logging in,” Lamb says.

And there was another problem: The site was also using a years-old version of Drupal — content management software — that had a critical software vulnerability long known to security researchers. “Drupageddon,” as researchers dubbed the vulnerability, got a lot of attention when it was first revealed in 2014. It would let attackers easily seize control of any site that used the software. A patch to fix the hole had been available for two years, but the center hadn’t bothered to update the software, even though it was widely known in the security community that hackers had created automated scripts to attack the vulnerability back in 2014.

Lamb was concerned that hackers might already have penetrated the center’s site, a scenario that wasn’t improbable given news reports of intruders probing voter registration systems and election websites; if they had breached the center’s network, they could potentially have planted malware on the server to infect the computers of county election workers who accessed it, thereby giving attackers a backdoor into election offices throughout the state; or they could possibly have altered software files the center distributed to Georgia counties prior to the presidential election, depending on where those files were kept.

Lamb privately reported the breach to University officials, the report notes. But he learned this March that the critical Drupal vulnerability had been fixed only on the HTTPS version of the site. What's more, the same mother lode of sensitive documents remained as well. The findings meant that the center was operating outside the scope of both the University and the Georgia Secretary of State for years.