The Federal Trade Commission announced settlements this week that could result in many fewer of those annoying Robocalls we've all been receiving.  Who did they sanction and what were those companies doing?

James Christiano ran a company that provided and operated softwarea called "TelWeb," a call spamming platform.  His software violated several laws, including places marketing calls to people on the "Do Not Call" list, and using a spoofed caller id, intending to deceive call recipients. 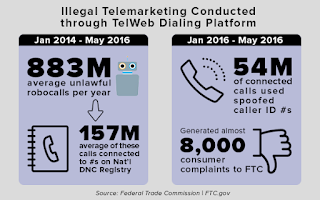 Of 883 Million robocalls per year, on the average, 157 million of the calls placed by TelWeb went to numbers on the National Do Not Call Registry.  At least 54 Million calls, just in the first half of 2016, had spoofed caller ID numbers.  The FTC received almost 8,000 consumer complaints against this company, which contributed greatly to choosing to pursue this lawsuit!
His companies, NetDotSolutions and TeraMESH Networks, were both named in the suit.  Additionally, Aaron Michael Jones and Andy Salisbury, two resellers of TelWeb, are both also named in the suit.  Which brings up one problem with these types of suits.  Jones was already "permanently banned" from doing telemarketing.  Salisbury and World Connection were each fined $2.7 million dollars. Nine of his previous companies were also subject to the ban previously:  1) Allorey, Inc.; 2) Audacity LLC; 3) Data World Technologies, Inc.; 4) Dial Soft Technologies, Inc.; 5) Digital Marketing Solutions, Inc.; 6) Savilo Support Services, Inc.; 7) Secure Alliance, Inc.; 8) Velocity Information Corp.; and 9) World Access Media.
Jones was also one of those charged in the Point Break Media case, where callers were told to "Press 1 to speak to a Google Specialist" who told them they were about to be "unlisted" from Google and charged them at least $169 to not be deleted from Google search results.

Have you had the Robocall about reducing your credit card interest rate?  It may have been coming from Higher Goals Marketing.  "According to the FTC’s complaint, Higher Goals Marketing LLC, Sunshine Freedom Services LLC, Brandun L. Anderson, Lea A. Brownell, Melissa M. Deese, Gerald D. Starr, Jr., and Travis L. Teel, have engaged in a telemarketing scheme that has deceived financially distressed consumers nationwide by pitching bogus credit-card interest-rate-reduction services."
Unfortunately, this is another case demonstrating that to robocallers, a multi-million dollar fine is just a slap on the wrist.  The defendants were helped with setting up their service just weeks by Wayne Norris, just weeks after he was put out of business by a previous FTC settlement against the company he was working for, Life Management Services, back in 2016.  He  is charged with violating the Telemarketing Sales Rule by helping the other defendants organize the telemarketing infrastructure they used to bombard consumers with illegal robocalls, putting a team of managers together to oversee the entire robocall operation, and helping to set up a shell company to collect illegal up-front fees from consumers.
In the case of Life Management Services, Wayne was asked to handle registering the new company for his boss, Steven Guise, because Guise was permanently banned from telemarketing.  He did so by asking a friend of his wife's to register the company in Florida. (See p.6 of this 51 page order .. https://www.ftc.gov/system/files/documents/cases/life_management_order_and_permanent_injunction_kevin_guice.pdf )
Wayne is behind the calls that start "This is Rachel, from Cardholder Services?"  In 2012, the FTC Chairman Jon Leibowitz declared Rachel from Cardholder Services "public enemy number one."  Back then, Wayne worked for Ambrosia Web Services.

You'll probably also be familiar with Peterson's "Veteran scams".  Using many different fake charity names, including Veterans of America, Vehicles for Veterans LLC, Saving Our Soldiers, Donate Your Car, Donate That Car LLC, Act of Valor, and Medal of Honor, Peterson made millions of calls asking people to donate a vehicle to help a veteran.
In addition to paying more than a $500,000 fine, Peterson also has to return 88 vehicles that he's stolen under the guise of a charitable donation.

More details on the case can be found in the court order here:  https://www.ftc.gov/system/files/documents/cases/pointbreak_media_-_pocker_defendants_stipulated_order.pdf