And this is already the end of Botconf. Time for my last wrap-up. The day started a little bit later to allow some people to recover from the social event. It started at 09:40 with a talk presented by Anthony Kasza, from PaloAlto Networks: “Formatting for Justice: Crime Doesn’t Pay, Neither Does Rich Text“. Everybody knows the RTF format… even more since the famous CVE-2017-0199. But what’s inside an RTF document? As the name says, it is used to format text. It was created by Microsoft in 1987. It has similarities with HTML: 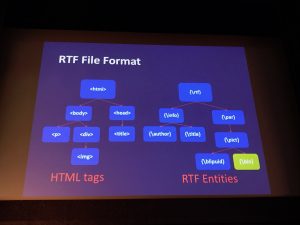 Entities are represented with ‘{‘ and ‘}’. Example:

This means that writing signature is complex. Also, just rename the document with a .doc extension and it will be opened by Word. How to generate RTF documents? They are the official “tools” like Microsoft or Wordpad but they are, of course, plenty of malicious tools:

What about analysis tools? Here also, it is easy to build a toolbox with nice tools: rtfdump, rtfobj, pyRTF, YARA are some of them. To write good signatures, Anthony suggested focussing on suspicious words:

DDEAUTO is a good candidate for a while and is seen as the “most annoying bug of the year” for its inclusion in everything (RTF & other documents, e-mail, calendar entries…). Anthony finished his talk by providing a challenge based on an RTF file.

The next talk was presented byPaul Jung: “PWS, Common, Ugly but Effective“. PWS also know as “info stealer” are a very common piece of malware. They steal credentials from many sources (browsers, files, registries, wallets, etc). 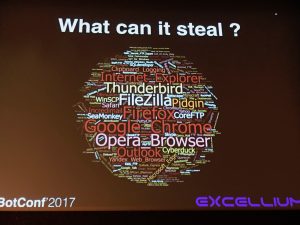 They also offer “bonus” features like screenshot grabbers or keylogger. How to find them? Buy them, find a cracked one or open sources. Some of them have also promotional videos on Youtube! A PWS is based on a builder that generates a specific binary based on the config file, it is delivered via protocols like email, HTTP and data are managed via a control panel. Paul reviewed some well-known PWS like JPro Crack Stealer, Pony (the most famous), Predator Pain or Agent Tesla. The last one promotes itself as “not being a malware”. Some of them support more than 130 different applications to steal passwords from. Some do not reinvent the wheel and just use external tools (ex: the Nirsoft suite). If it is difficult to detect them before the infection, it’s quite easy to spot them based on the noise they generate in log files. They use specific queries:

After the first coffee refill break, Paul Rascagnères presented “Nyetya Malware & MeDoc Connection“. The presentation was a recap of the bad story that affected Ukraine a few months ago. It started with a phone call saying “We need help“. They received some info to start the investigation but their telemetry did not return anything juicy (Talos collects a huge amount of data to build their telemetry). Paul explained the case of M.E. Doc, a company providing a Windows application for tax processing. The company servers were compromised and the software was modified. Then, Paul reviewed the Nytia malware. It used WMI, PsExec, EternalBlue, EternalRomance and scanned ranges of IP to infect more computers. It also used a modified version of Mimikatz. Note that Nyetya cleared the infected host logs. This is a good reminder to always push logs on an external system to prevent losing pieces of evidence.

The next talk was about a system to track the Locky ransomware based on its DGA: “Math + GPU + DNS = Cracking Locky Seeds in Real Time without Analyzing Samples“. Yohai Einav Alexey Sarychev explained how they solved the problem to detect as fast as possible new variation of domain names used by the Locky ransomware. The challenges were:

So solution they developed is based on GPU (for maximum speed). If you’re interested in the Locky DGA, you can have a look at their dataset.

The next talk was, for me, the best of the day because it contained a lot of useful information that many people can immediately reuse in their environment to improve the detection of malicious behaviour or to improve their DFIR process. It was titled “Hunting Attacker Activities – Methods for Discovering, Detecting Lateral Movements” and presented by Keisuke Muda and Shusei Tomonaga. Based on their investigations, they explained how attackers can perform lateral movement inside a network just be using standard Windows tools (that, by default, are not flagged as malicious by the antivirus). 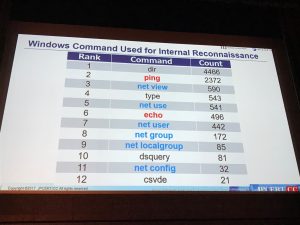 They presented multiple examples of commands or small scripts used to scan, pivot, cover tracks, etc. Then they explained how to detect this kind of activity. They made a good comparison of the standard Windows audit log versus the well-known Sysmon tool. They presented pro & con of each solution and the conclusion could be that, for maximum detection, you need both. There were so many examples that it’s not possible to list them here. I just recommend you to have a look at the documents available online:

It was an amazing presentation!

After the lunch, Jaeson Schultz, also from Talos, presented “Malware, Penny Stocks, Pharma Spam – Necurs Delivers“. The talk was a good review of the biggest spam botnet active. Just some numbers collected from multiple campaigns; 2.1 messages, 1M unique sender IP addresses from 216 countries/territories. The top countries are India, Vietnam, Iran and Pakistan. Jaeson explained that the re-use of IP address is so low that it’s difficult to maintain blacklists. 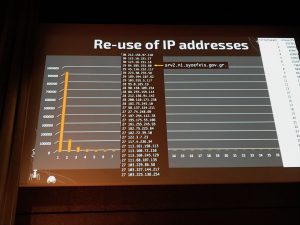 How do the bad guys send emails? They use harvested accounts (of course) but also auto-generated addresses and common / role-based accounts. That’s why the use of catch-all mailboxes is useful. Usually, big campaigns are launched from Monday to Friday and regular campaigns are constantly running at a low speed. Jaeson presented many examples of spam, attachments. Good review with entertaining slides.

Then, Łukasz Siewierski presented “Thinking Outside of the (Sand)box“. Łukasz is working for Google (Play Store) and analyze applications. He said that all applications submitted to Google are reviewed from a security point of view. Android has many security features: SE linux, application sandbox, permission model, verified boot, (K)ASLR, Seccomp but the presentation focused on the sandbox. First, why is there a sandboxing system? To prevent spyware to access other applications data, to prevent applications to pose as other ones, make easy to attribute action to specific apps and to allow strict policy enforcement.  But how to break the sandbox? First, the malware can ask users for a number of really excessive permissions. In this case, you just have to wait and cross your fingers that he will click “Allow”. Another method is to use Xposed. I already heard about this framework at Hack in the Box. It can prevent apps to be displayed in the list of installed applications. It gives any application every permission but there is one big drawback: the victim MUST install Xposed! The other method is to root the phone, inject code into other processes and profit. Łukasz explained different techniques to perform injection on Android but it’s not easy. Even more since the release of “Nougat” which introduced now mitigations techniques.

The last slot was assigned to Robert Simmons who presented “Advanced Threat Hunting“. It was very interesting because Robert gave nice tips to improve the process of threat hunting. It can require a lot of resources that are … limited! We have small teams with limited resources and limited time. He also gave tips to better share information. A good example is YARA rules. Everybody has a set of YARA rules in private directories, on laptops, etc. Why not store them in a central repository like a gitlab server? Many other tips were given that are worth a read if you are performing threat hunting.

The event was close to the classic kind word of the team. You can already book your agenda for the 6th edition that will be held in Toulouse! 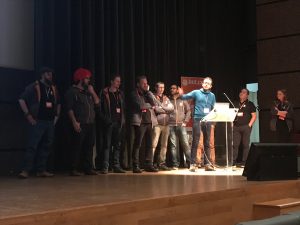