BluStealer is is a crypto stealer, keylogger, and document uploader written in Visual Basic that loads C#.NET hack tools to steal credentials. The family was first mentioned by @James_inthe_box in May and referred to as a310logger. In fact, a310logger is just one of the namespaces within the .NET component that appeared in the string artifacts. Around July, Fortinet referred to the same family as a “fresh malware”, and recently it is mentioned again as BluStealer by GoSecure. In this blog, we decide to go with the BluStealer naming while providing a fuller view of the family along with details of its inner workings. 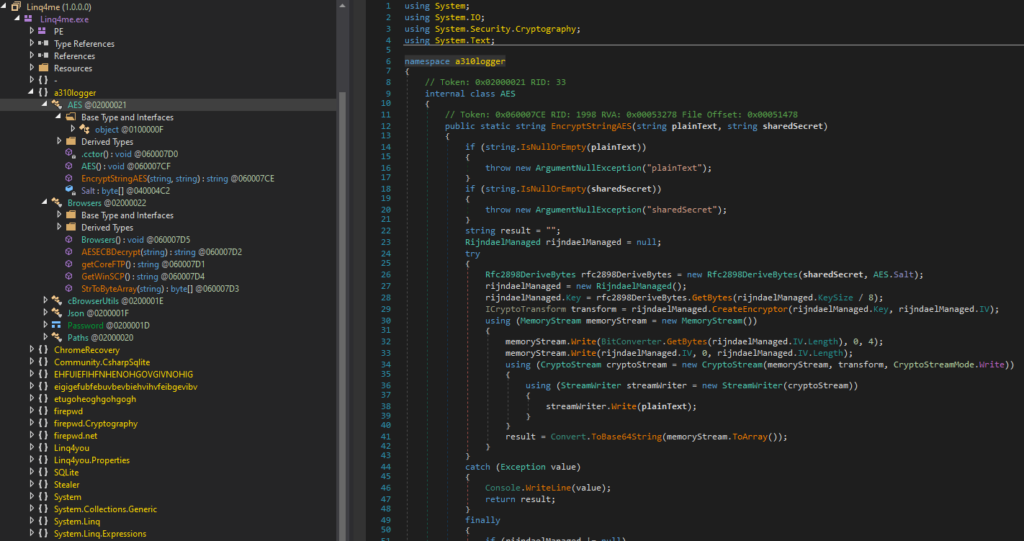 a310logger is just one of the multiple C# hack tools in BluStealer’s .NET component.

BluStealer is primarily spread through malspam campaigns. A large number of the samples we found come from a particular campaign that is recognizable through the use of a unique .NET loader. The analysis of this loader is provided in this section. Below are two BluStealer malspam samples. The first is a fake DHL invoice in English. The second is a fake General de Perfiles invoice, a Mexican shipping company, in Spanish. Both samples contain .iso attachments and download URLs that the messages claim is a form that the lure claims the recipient needs to open and fill out to resolve a shipping problem. The attachments contain the malware executables packed with the mentioned .NET Loader. 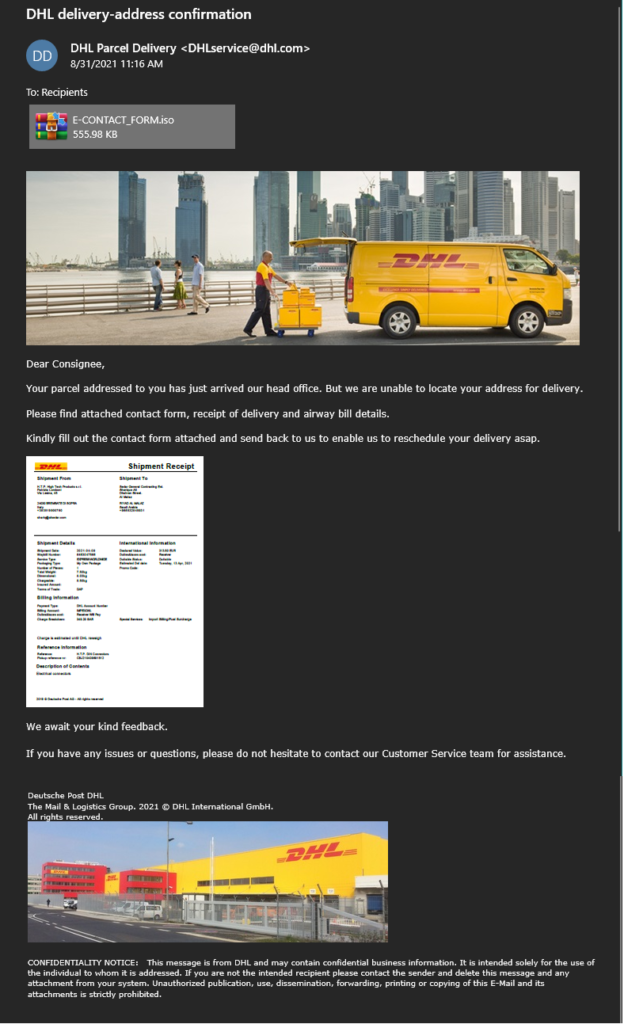 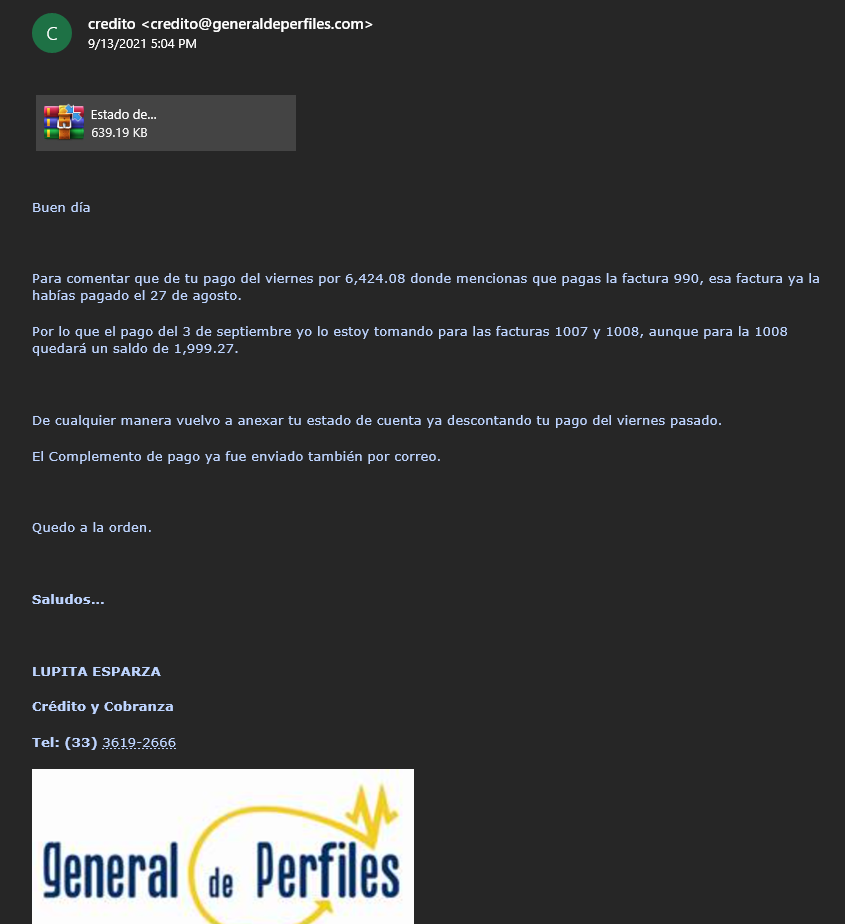 In the graph below, we can see a significant spike in BluStealer activity recently around September 10-11, 2021.

The daily amount of Avast users protected from BluStealer

As mentioned, BluStealer consists of a core written in Visual Basic and the C# .NET inner payload(s). Both components vary greatly among the samples indicating the malware builder’s ability to customize each component separately. The VB core reuses a large amount of code from a 2004 SpyEx project, hence the inclusion of “SpyEx” strings in early samples from May. However, the malware authors have added the capabilities to steal crypto wallet data, swap crypto addresses present in the clipboard, find and upload document files, exfiltrate data through SMTP and the Telegram Bot API, as well as anti-analysis/anti-VM tactics. On the other hand, the .NET component is primarily a credential stealer that is patched together from a combination of open-source C# hack tools such as ThunderFox, ChromeRecovery, StormKitty, and firepwd. Note that not all the mentioned features are available in a single sample.

Example of how the strings are decrypted within BluStealer

Each string is encrypted with a unique key. Depending on the sample, the encryption algorithm can be the xor cipher, RC4, or the WinZip AES implementation from this repo. Below is a Python demonstration of the custom AES algorithm: 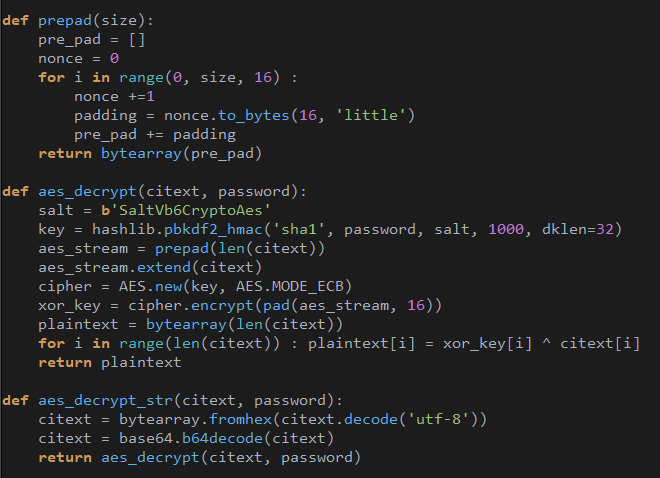 A utility to help decrypt all strings in IDA is available here.

If property SerialNumber of Win32_BaseBoard WMI class contains  0 or None

If the following files exist:

If any of these conditions are satisfied, BluStealer will stop executing.

The BluStealer retrieves the .NET payload(s) from the resource section and decrypts it with the above WinZip AES algorithm using a hardcoded key. Then it executes one of the following command-line utilities to launch the .NET executable(s):

1024×403
Examples of two .NET executables loaded by the VB core. The stolen credentials are written to “credentials.txt”

The .NET component does not communicate with the VB core in any way. It steals the credentials of popular browsers and applications then writes them to disk at a chosen location with a designated filename (i.e credentials.txt). The VB core will look for this drop and exfiltrate it later on. This mechanic is better explained in the next section.

The .NET component is just a copypasta of open-source C# projects listed below. You can find more information on their respective Github pages:

Both the VB core and the .NET component write stolen information to the %appdata%\Microsoft\Templates folder. Each type of stolen data is written to a different file with predefined filenames. The VB core sets up different timers to watch over each file and keeps track of their file sizes. When the file size increases, the VB core will send it to the attacker.

BluStealer VB core also detects the crypto addresses copied to the clipboard and replaces them with the attacker’s predefined ones. Collectively it can support the following addresses: Bitcoin, bitcoincash, Ethereum, Monero, Litecoin.

BluStealer exfiltrates stolen data via SMTP (reusing SpyEx’s code) and Telegram Bot, hence the lack of server-side code. The Telegram token and chat_id are hardcoded to execute the 2 commands: sendDocument and sendMessage as shown below 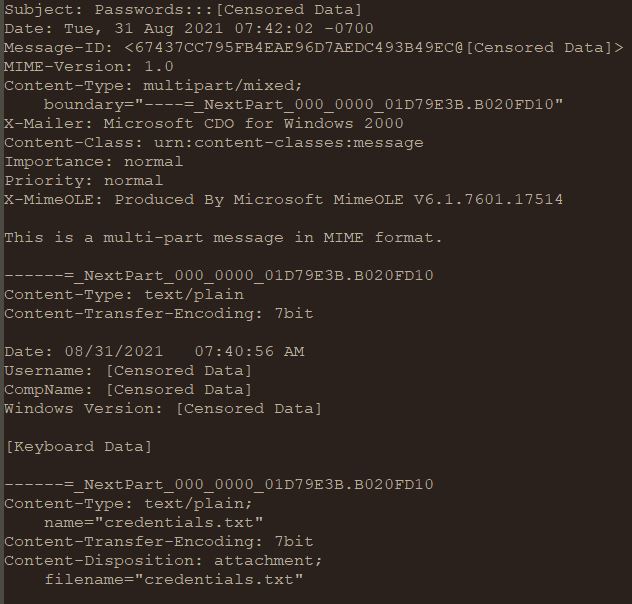 This .NET Loader has been used by families such as Formbook, Agent Tesla, Snake Keylogger, Oski Stealer, RedLine, as well as BluStealer.

The first stage of the .NET loader has a generic obfuscated look and isn’t matched by de4dot to any known .NET obfuscator. However, one recognizable characteristic is the inclusion of a single encrypted module in the resource:

By looking for this module’s reference within the code, we can quickly locate where it is decrypted and loaded into memory as shown below 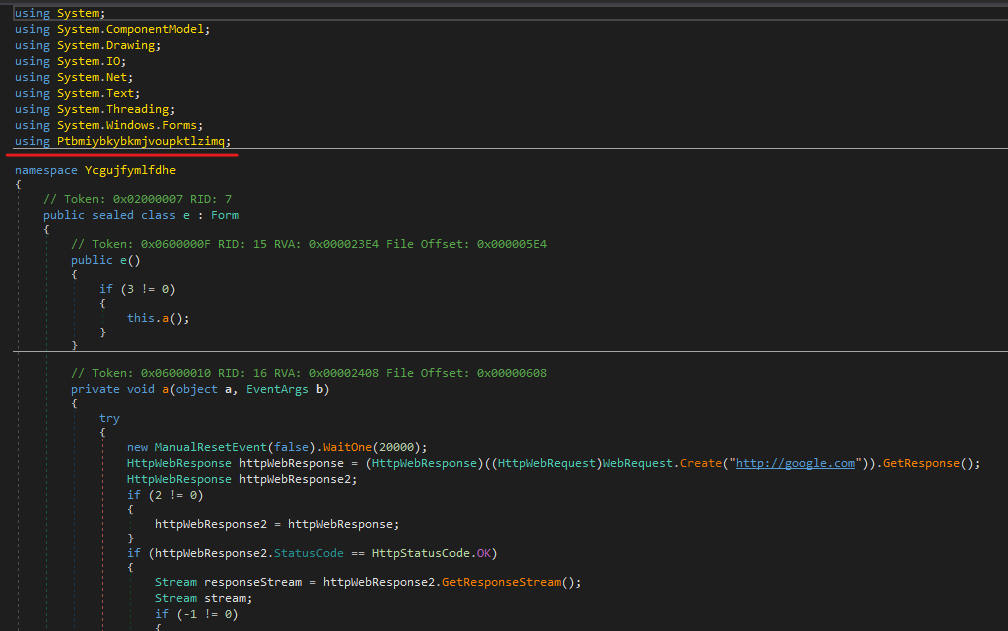 Prior to loading the next stage, the loader may check for internet connectivity or set up persistence through the Startup folder and registry run keys. A few examples are:

In the samples we looked at closely, the module is decrypted using RC4, with a hardcoded key. The key is obfuscated by a string provider function. The best way to obtain the payload is to break at the tail jump that resides within the same namespace where the encrypted module is referenced. In most cases, it usually is the call to the external function Data(). Below are examples from the different samples:

The second stage has the function calls and strings obfuscated, so the “Analyze” feature may not be as helpful. However, there are two resource files that look out-of-place enough for us to pivot off. Their getter functions can be easily found in the Resources class of the Properties namespace. Setting the breakpoint on the Ehiuuvbfrnprkuyuxqv getter function 0x17000003 leads us to a function where it is gzip decompressed revealing a PE file. 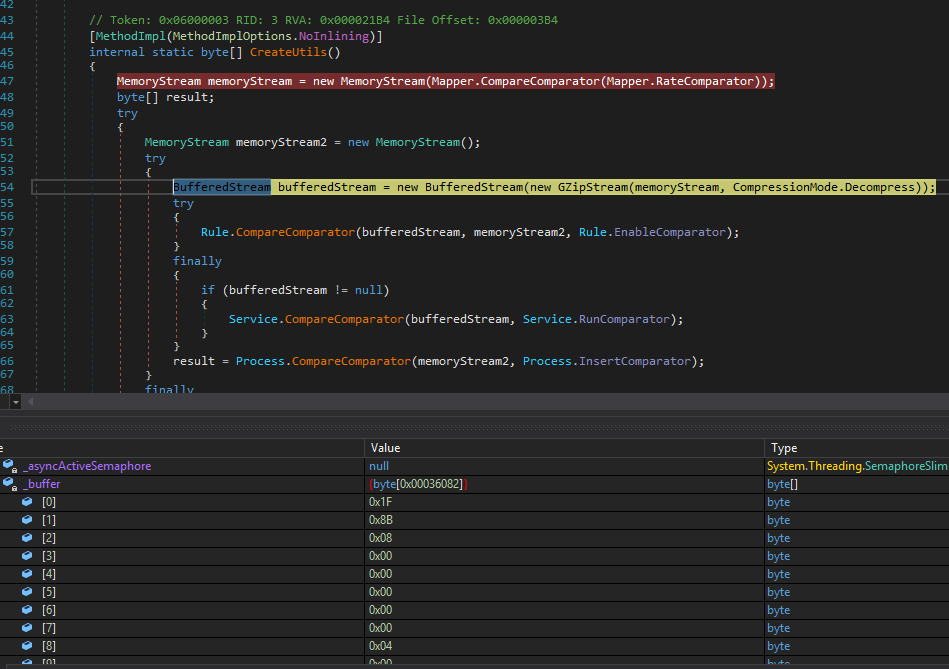 Ehiuuvbfrnprkuyuxqv is decompressed with gzip

On the other hand, the breakpoint on the Ltvddtjmqumxcwmqlzcos getter function 0x17000004 leaves us in the middle of the Data() function, where all the function calls are made by passing a field into CompareComparator function that will invoke it like a method.

ComareComparator is used to invoke one of the argument

In order to understand what is going on, we have to know what functions these fields represent. From the experience working with MassLogger in the past, the field to method map file is likely embedded in the resource section, which in this case, “Dic.Attr” naming is a strong tell.

Note that it is important to find out where these fields are mapped to, because “Step into” may not get us directly to the designated functions. Some of the mapped functions are modified during the field-method binding process. So when the corresponding fields are invoked, the DynamicResolver.GetCodeInfo() will be called to build the target function at run-time. Even though the function modification only consists of replacing some opcodes with equivalent ones while keeping the content the same, it is sufficient enough to obfuscate function calls during dynamic analysis. 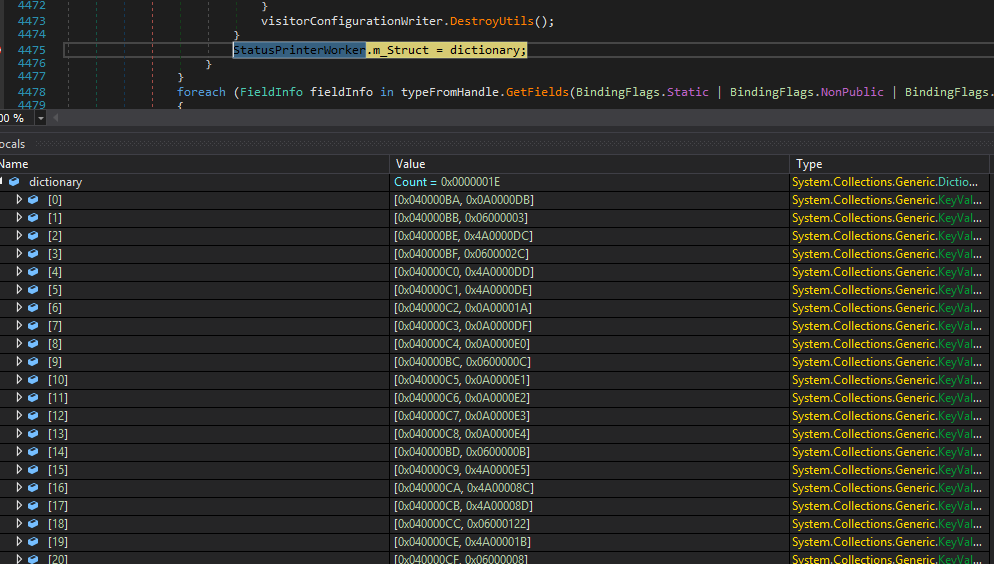 The search of the “Dic.Attr” string leads us to the function where the mapping occurs. The dictionary value represents the method token that will be bound, and the key value is the corresponding field. As for the method tokens start with 0x4A, just replace them with 0x6 to get the correct methods. These are the chosen ones to be modified for obfuscation purposes.

With all the function calls revealed, we can understand what’s going on inside the Data() method. First, it loads a new assembly that is the decompressed Ehiuuvbfrnprkuyuxqv. Then, it tries to create an instance of an object named SmartAssembly.Queues.MapFactoryQueue. To end the mystery, a method called “RegisterSerializer” is invoked with the data of the other resource file as an argument. At this point, we can assume that the purpose of this function would be to decrypt the other resource file and execute it.

Overview of the decompressed Ehiuuvbfrnprkuyuxqv. Here you can find the method RegisterSerializer locates inside SmartAssembly.Queues.MapFactoryQueue

The unpacking process will not be much different from the previous layer but with the overhead of code virtualization. From static analysis, our RegisterSerializer may look empty but once the SmartAssembly.Queues class is instantiated the method will be loaded properly: 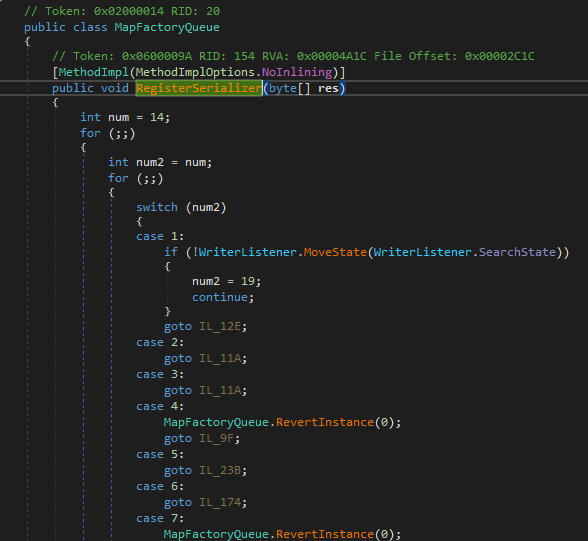 The function content after instantiated. Note that argument “res” represents the data of the second resource file

Fast forward to where res is processed inside RegisterSerializer()

Lucky for us, the code looks fairly straightforward. The variable “res” holding the encrypted data and is passed to a function that RulesListener.IncludeState represents. Once again, the key still is to find the field token to method token map file which is likely to be located in the resource section. This time searching for the GetManifestResourceStream function will help us quickly get to the code section where the map is established: 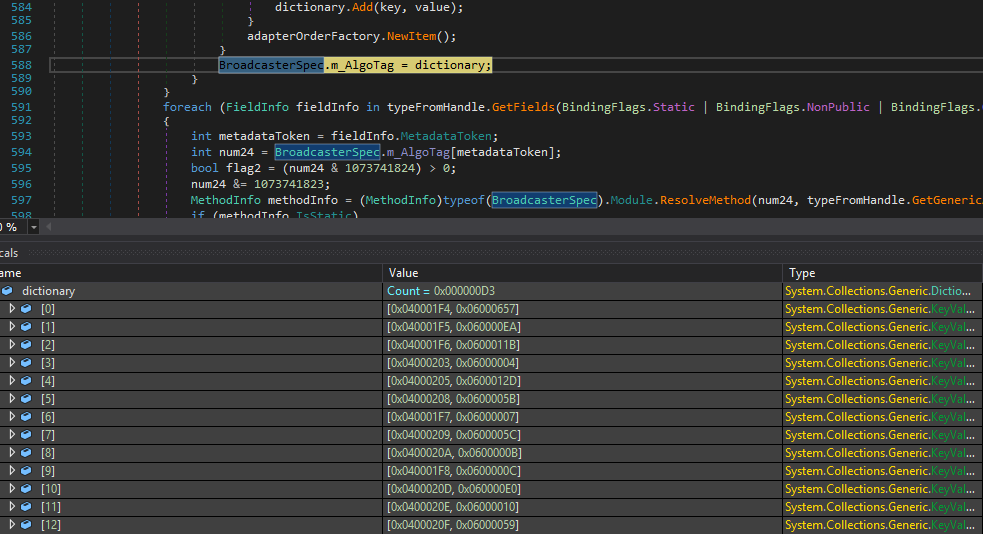 The resource file Params.Rules is interpreted into a field-method dictionary

RulesListener.IncludeState has token 0x04000220 which is mapped to function 0x60000A3. Inside this function, the decryption algorithm is revealed anticlimactically: reversal and decompression:

Data from Ltvddtjmqumxcwmqlzcos is reversed

Then it is decompressed and executed

In fact, all the samples can be unpacked simply by decompressing the reversed resource file embedded in the second stage. Hopefully, even when this algorithm is changed, my lengthy walkthrough will remain useful at showing you how to defeat the obfuscation tricks.

In this article, we break down BluStealer functionalities and provide some utilities to deobfuscate and extract its IOCs. We also highlight its code reuse of multiple open-source projects. Despite still writing data to disk and without a proper C2 functionality, BluStealer is still a capable stealer. In the second half of the blog, we show how the BluStealer samples and other malware can be obtained from a unique .NET loader. With these insights, we hope that other analysts will have an easier time classifying and analyzing BluStealer.

The full list of IoCs is available at https://github.com/avast/ioc/tree/master/BluStealer