Several weeks ago, the Windows Defender Advanced Threat Protection (Windows Defender ATP) team uncovered a new cyberattack that targeted several high-profile organizations in the energy and food and beverage sectors in Asia. Given the target region and verticals, the attack chain, and the toolsets used, we believe the threat actor that the industry refers to as Tropic Trooper was likely behind the new attack.

With the high risk determined for affected machines, Conditional access blocked these machines access to sensitive content, protecting other users, devices, and data in the network. IT admins can control access with Conditional access based on the device risk score to ensure that only secure devices have access to enterprise resources.

Finally, automatic investigation and remediation kicked in, discovered the artifacts on affected machines that were related to the breach, and remediated the threat. This sequence of actions ensured that the attackers no longer have foothold on affected machines, returning machines to normal working state. Once the threat is remediated, the risk score for those machines was reduced and Conditional access restrictions were lifted.

We discovered the attack when Windows Defender ATP called our attention to alerts flagging several different suspicious activities like abnormal Office applications activity, dubious cross-process injections, and machine-learning-based indications of anomalous executions flows. The sheer volume and variety of the alerts told us something serious was going on. 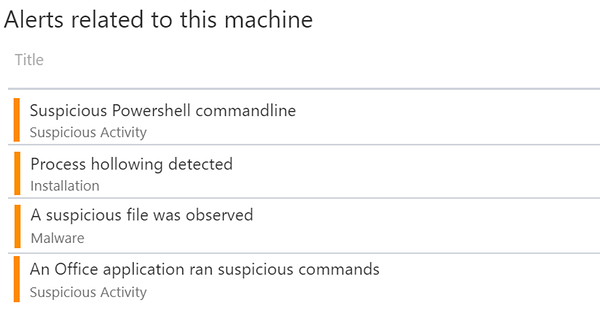 The first detection related to the attack was fired by a suspicious EQNEDT32.exe behavior, which led us to the entry vector of the attack: a malicious document that carried an exploit for CVE-2018-0802, a vulnerability in Microsoft Office Equation Editor, which the actor known as Tropic Trooper has exploited in previous campaigns.

Through the tight integration between Windows Defender ATP and Office 365 ATP, we were able to use Office 365 ATP Threat Explorer to find the specific emails that the attackers used to distribute the malicious document.

Using Windows Defender Security Center, we further investigated the detected executable and found that the attackers used bitsadmin.exe to download and execute a randomly named payload from a remote server:

In some cases, the attacker ran additional activities using malicious PowerShell scripts. Windows Defender ATPs Antimalware Scan Interface (AMSI) sensor exposed all the attacker scripts, which we observed to be for meant mostly for data exfiltration.

Using the timeline and process tree views in Windows Defender Security Center, were able to identity the processes exhibiting malicious activities and pinpoint exactly when they occurred, allowing us to reconstruct the attack chain. As a result of this analysis, we were able to determine a strong similarity between this new attack and the attack patterns used by the threat actor known as Tropic Trooper. 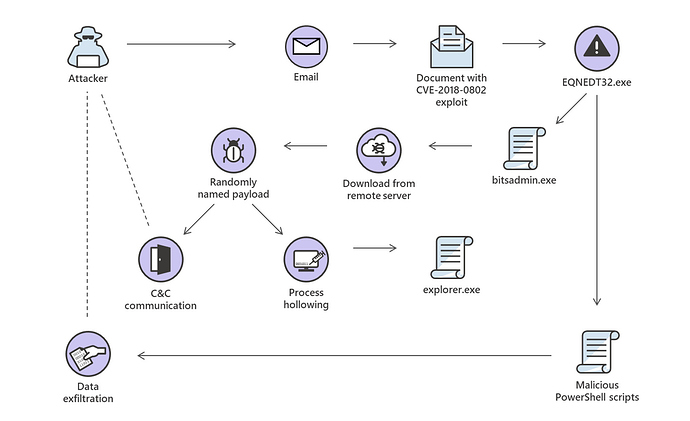 In this specific attack, the risk calculation mechanism gave the affected machines the highest risk based on cumulative risk. Cumulative risk is calculated based on the multiple component and multiple types of anomalous behaviors exhibited by an attack across the infection chain.

When Windows Defender ATP raises the device risk score for machines, as in this attack, the affected devices are marked as being at high risk. This risk score is immediately communicated to Conditional access, resulting in the restriction of access from these devices to corporate services and data managed by Azure Active Directory.

This integration between Windows Defender ATP and Azure Active Directory through Microsoft Intune ensures that attackers are immediately prevented from gaining access to sensitive corporate data, even if attackers manage to establish a foothold on networks. When the threat is remediated, Windows Defender ATP drops the device risk score, and the device regains access to resources. Read more about Conditional access here.

In this attack investigation, the integration of Windows Defender ATP and Office 365 ATP allowed us to trace the entry vector, and security operations teams can seamlessly pivot between the two services, enabling them to investigate the end-to-end timeline of an attack.

Threat signal sharing across services through the Intelligent Security Graph ensures that threat remediation is orchestrated across Microsoft Threat Protection. In this case, Office 365 ATP blocked the related email and malicious document used in the initial stages of the attack. Office 365 ATP had determined the malicious nature of the emails and attachment at the onset, stopping the attacks entry point and protecting Office 365 ATP customers from the attack.

Meanwhile, as mentioned, the integration of Windows Defender ATP and Azure Active Directory ensured that affected devices are not allowed to access sensitive corporate data until the threat is resolved.
Windows Defender ATP, Office 365 ATP, and Azure Active Directory are just three of the many Microsoft services now integrate through Microsoft Threat Protection, an integrated solution for securing identities, endpoints, user data, cloud apps, and infrastructure.

The new device risk calculation mechanism in Windows Defender ATP raised the priority of various alerts that turned out to be related to a targeted attack, exposing the threat and allowing security operations teams to immediately take remediation actions. Additionally, the elevated device risk score triggered automated investigation and response, mitigating the attack at its early stages.

Through Conditional access, compromised machines are blocked from accessing critical corporate assets. This protects organizations from the serious risk of attackers leveraging compromised devices to perform cyberespionage and other types of attacks.

To test how these and other advanced capabilities in Windows Defender ATP can help your organization detect, investigate, and respond to attacks, sign up for a free trial.

Questions, concerns, or insights on this story? Join discussions at the Microsoft community and Windows Defender Security Intelligence.