The end of May 2018 has marked the emergence of three malware campaigns built on publicly available source code for the Mirai and Gafgyt malware families that incorporate multiple known exploits affecting Internet of Things (IoT) devices.

Samples belonging to these campaigns incorporate as many as eleven exploits within a single sample, beating the IoT Reaper malware, which borrowed some of the Mirai source code but also came with an integrated LUA environment that incorporated nine exploits in its code.

In their newest evolution, samples also target the D-Link DSL-2750B OS Command Injection  vulnerability, only a few weeks after the publication of its Metasploit module on the 25th of May (even though the vulnerability has been public knowledge since February of 2016).

While exploring samples belonging to one of these campaigns, I also discovered they support several new DDoS methods previously unused by Mirai variants.

This blog post details each campaign (in the chronological order they were observed) along with the exploits used, the new DDoS methods supported, ending in a comparative summary of the campaigns.  Also covered is the tangential discovery of some Gafgyt samples incorporating new Layer 7 DDoS functionality targeting a known DDoS-protection provider.

IOCs for different campaigns, if not mentioned under the corresponding section, can be found at the end of this blog post.

CAMPAIGN 1: An evolution of Omni

In May 2018, the Omni botnet, a variant of Mirai, was found exploiting two vulnerabilities affecting Dasan GPON routers – CVE-2018-10561 (authentication bypass) and CVE-2018-1562 (command injection). The two vulnerabilities used in conjunction allow the execution of commands sent by an unauthenticated remote attacker to a vulnerable device.

Since then the same family has evolved to incorporate several more exploits, detailed in Table 1.

I used the sample below for this analysis

All of these vulnerabilities are publicly known and have been exploited by different botnets either separately or in combination with others in the past, however, this is the first Mirai variant using all eleven of them together.

Differentiating features of the campaign:

Figure 1: Screenshot from malware disassembly showing the use of iptables to drop future connection attempts via certain ports

Pivoting off this IP, I discovered some Gafgyt samples that surfaced around the same time reporting to the same IP, but using a new method named ‘SendHTTPCloudflare‘. This method is detailed at the end of this blog post.

This campaign was linked to the Omni variant on several references in the code as seen such as the one seen in Figure 2 below.

The encrypted strings also reference a website gpon[.]party that was down at the time of this writing.

Samples from this campaign were served from the IP 46[.]243.189.101. This host briefly had an open directory containing the samples, as seen in the figure below. 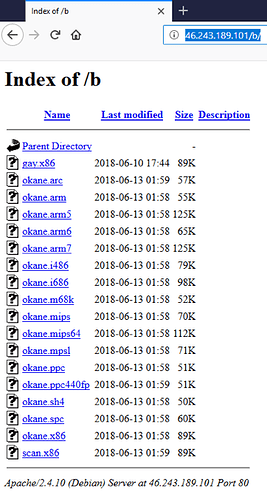 The payload source in this attack was located at hxxp://46[.]243.189.101/gang/. The downloaded payload is a shell script that attempts to replicate itself by downloading Okane binaries to vulnerable devices.  On the 13th of June, the payload source for some of these samples was briefly replaced with the Cloudflare DNS server 1[.]1.1.1.

This campaign incorporates the same exploits listed in Table 1. Figure 5 shows these exploits being called sequentially in one of the samples belonging to this campaign. Each call results in the creation of a dedicated fork for each exploit. 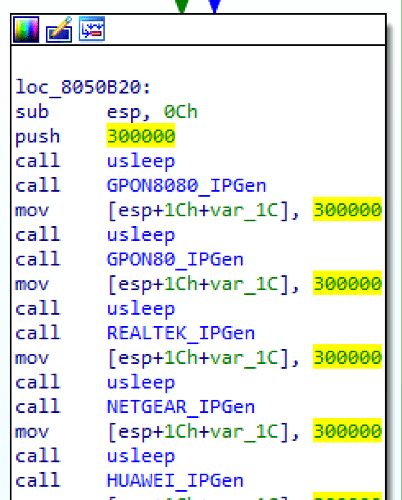 Figure 5: Screenshot from malware disassembly of exploit calls in a sample from Campaign 2

Unlike the previous campaign, these samples also perform a credential brute force attack. Some unusual entries were discovered on the brute force lists in these samples, such as the following:

Some samples belonging to this campaign include the addition of two new DDoS methods to the Mirai source code.

Below are descriptions of these new DDoS methods, extracted from the following sample.

Digging deeper reveals that samples using these attack methods have been part of a Mirai code fork from as early as August 2017.

For this analysis I used a sample with the following hash.

On the 19th of June, samples on this server were stripped of their exploits and reverted to using a simple brute force and subsequently dropping a shell script, for self-propagation.

Earlier samples belonging to this campaign use all the exploits detailed in Table 1, except for the UPnP SOAP TelnetD Command Execution exploit.  The payload source for this campaign was hxxp://hakaiboatnet[.]pw/m and the C2 server was 178[.]128.185.250. Samples make use of an encryption scheme similar to Mirai; unlike previous campaigns, they are built on the Gafgyt source code, which is also known as Bashlite, Lizkebab, Torlus or LizardStresser.

Samples listen for the following commands:

Newer samples from the same server were found to have also incorporated an OS Command Injection exploit against D-Link DSL-2750B devices. These samples use the same attack methods, encryption key and C2 as the samples above, however they source their payload from hxxp://178[.]128.185.250/e.

Table 2 shows a comparative summary of the three campaigns

Gafgyt with a new Layer-7 attack

Layer-7 DDoS attacks targeting specific DDoS protection service vendors are not new and were already observed in the form of the DvrHelper variant of Mirai.

They have however not been observed used by Gafgyt samples until now. While pivoting on the C2 used by samples of Campaign 1, I came across some Gafgyt samples listening for an additional command called HTTPCF.

When this command is received, the bot calls a function called SendHTTPCloudflare that does as its name suggests, targeting a URL path used mostly by sites protected by Cloudflare. The earliest samples observed using this attack were from the end of May 2018.

They also make use of some unusual User-Agents (UA) as seen in Figure 9. All UAs found in these samples are listed in the appendix

The initial rise of botnets targeting embedded systems had brought to light the security risks from millions of Internet-connected devices configured with default credentials.

The evolution of these botnets to the use of multiple exploits, be it IoT Reaper or the campaigns discussed here, shows how attackers can build enormous botnets consisting of different types of devices, all responding to the same C2 server. This is exacerbated by the speed of exploitation in the wild of newly released vulnerabilities and also highlights the need for security vendor reactivity in response to these disclosures, applicable to the subset of these devices that do fall under the protection of security devices. However, the onus is on device manufacturers to ensure their devices are easy to update, and that they deploy the updates in a timely manner.

Palo Alto Networks customers benefit from the following protections against these attacks:

AutoFocus customers can also use the following malware family tags :

All exploits and IPs/URLs involved in these campaigns are blocked through Threat Prevention and PANDB.