UK Adults Are Sourcing Their News From TikTok 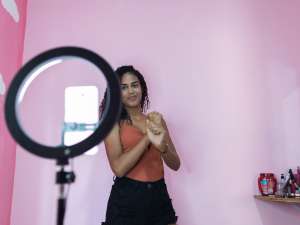 A new survey conducted by OFCOM, the UK’s communications regulator has found that an increasing number of British adults are using TikTok as their primary source for news. They also found that Instagram and YouTube are popular social-media driven sources for news.

Currently just seven per cent of adults are relying on TikTok, but the platform is currently the fastest growing in terms of market share. Perhaps more interesting still is the kinds of accounts that users rely on for their news.

The news isn’t the news any more

According to the survey respondents, 44% get their news from “people they follow”. 32% rely on their friends and family – but just 24% are following or using traditional media outlets like ITV or the BBC.

This shift in news consumption is not restricted to the UK either. Similar research suggests that 25% of millennials and Gen Z users are sourcing their news from TikTok too. This would indicate that far from being a just a platform for viral videos, TikTok could establish itself as an important source of timely information too.

But there’s a problem…

Like other social media platforms, there is a serious concern about the accuracy of ‘news’ being shared on TikTok. Like Facebook and Twitter before it, TikTok has also been used to share plenty of ‘fake news’ stories in the past. There have been many complaints about the app being used to circulate false stories about the war in Ukraine for instance.

TikTok community guidelines state that moderators will take action to remove fake news. However, like other social media platforms, videos are often viewed and reshared thousands of times before they are taken down. By then, the damage to public trust has already been done.

Could there be an even bigger problem with TikTok?

TikTok has also come under fire for failing to protect the data and security of its users. And as recently as June, members of the Federal Communications Commission were calling for Apple and Google to remove TikTok from their app stores.

Why? Because several sources inside the US government maintain that the company behind TikTok, ByteDance, is required by law to follow the Chinese government’s laws on data surveillance. Which raises concerns that personal data is being harvested from app users across the world – some suggest that the app may even be a national security issue.

Without any definitive proof beyond confirmation that Chinese-based employees have been accessing US user data, it is hard to say whether these concerns are legitimate. However, it is clear that TikTok is immensely popular with its users – and they are finding it a useful source of information as well as entertainment.

Want to learn more about TikTok? Take a look t our blog for some other useful TikTok articles and tips.

The post UK Adults Are Sourcing Their News From TikTok appeared first on Panda Security Mediacenter.

Article Link: UK Adults Are Sourcing Their News From TikTok