This blog post covers two new features from BinaryNinja version 2.3 (though both have seen some improvements on post-2.3 development branches as well!). Variable and type cross-references (xrefs) are two highly-demanded features for version 2.3. The two issues had accumulated 13 and 23 thumbs-up on GitHub, respectively. I am honored to work on such important features.

When a variable is selected, BinaryNinja now lists all of the xrefs to it:

You should have noticed that the xref item preview shows the same IL as in the graph, in this case, MLIL. This hopefully makes the xref more useful than always showing the disassembly.

Double-clicking an xref item sends you to the corresponding line at the same IL, even if there are multiple IL instructions at the same address because they are internally identified by their instruction index.

Also, the filter now allows the user to toggle what type(s) of references they wish to see: 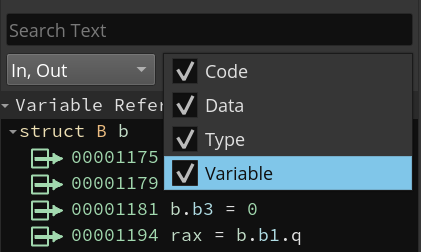 Type cross-references are a bit more complex. Let’s start with the Type view: 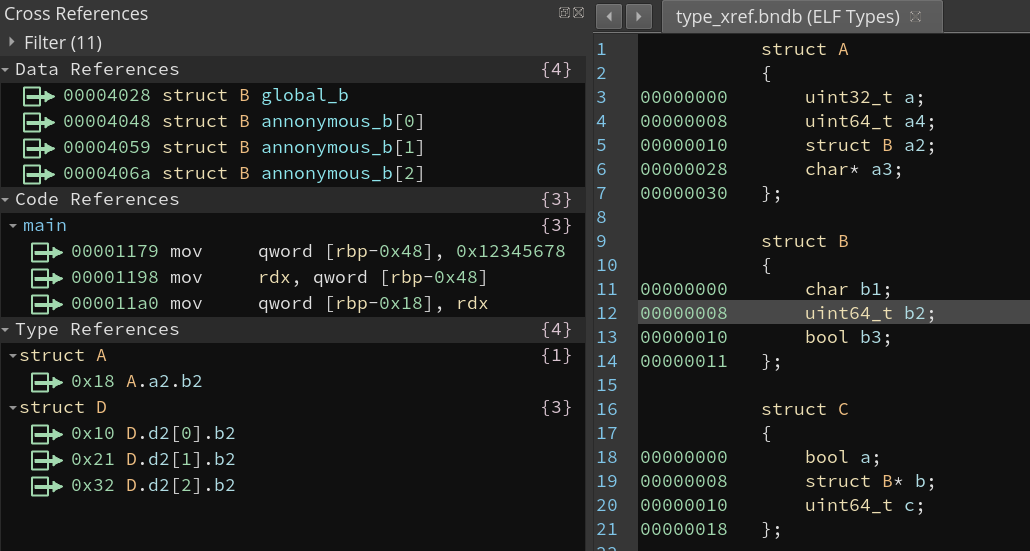 Type xrefs can have three forms:

Let’s have a look at what we get when I select the b2 field in struct B.

Also, the current implementation works better for arrays. annonymous_b is an array of struct B, and the xref widget makes it clear: there are three occurrences of field b2, and it shows three xrefs. And each one with its actual address, respectively: 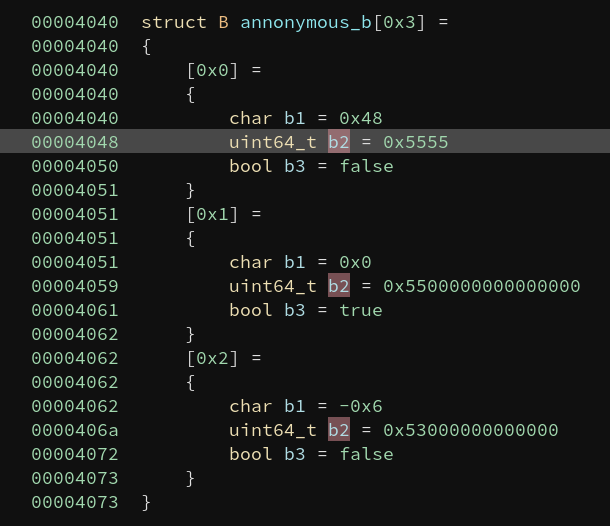 However, this is not free from problems. A huge array could cause performance issues, for example. So we put a cap there: for each category of cross-references, we only show the first 1,000 references in the UI. If you wish to retrieve all of them, the API will be happy to help you. The limit is configurable on development releases after build 2714 (or the next stable 3.0 when it’s released!) as ui.maxXrefItems.

The next form of type xref is code references. They show where in code a type or type field is used.

The references should be easy to understand, but there is one behavior that is worth mentioning. When we query the xrefs to a type, it shows the xrefs to the type itself. This can be different from xrefs to the offset 0x0 of the type, in several cases. In fact, when we take the address of a struct B, that is considered a reference to the structure itself, rather than its first member. However, in other cases, they cannot be distinguished, so both are shown. If you are confused by this, do not worry – most of the time we are interested in the xrefs to type fields.

The last category of type xref is the appropriately named: type reference. They describe how types reference one another. Since struct B is also a member of struct A, we know the field b2 is also part of the struct A, which can be seen here: 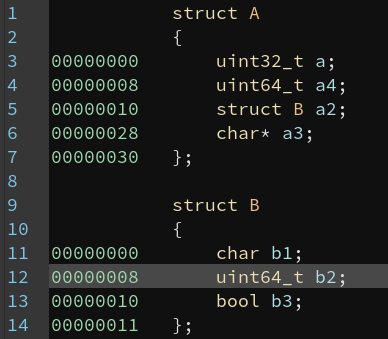 Also, struct D (not shown in the screenshot) includes an array of struct B, it makes up several references as well.

Double-clicking a type reference item will send you to the type view and highlight the corresponding field, which is an intuitive behavior.

The last feature related to the UI is you can select a range of code, and the xref widget will show all of the outgoing variables and type xrefs (along with outgoing code and type references as well, which hasn’t changed). The list can grow very long quickly, which is a good excuse for applying a filter. 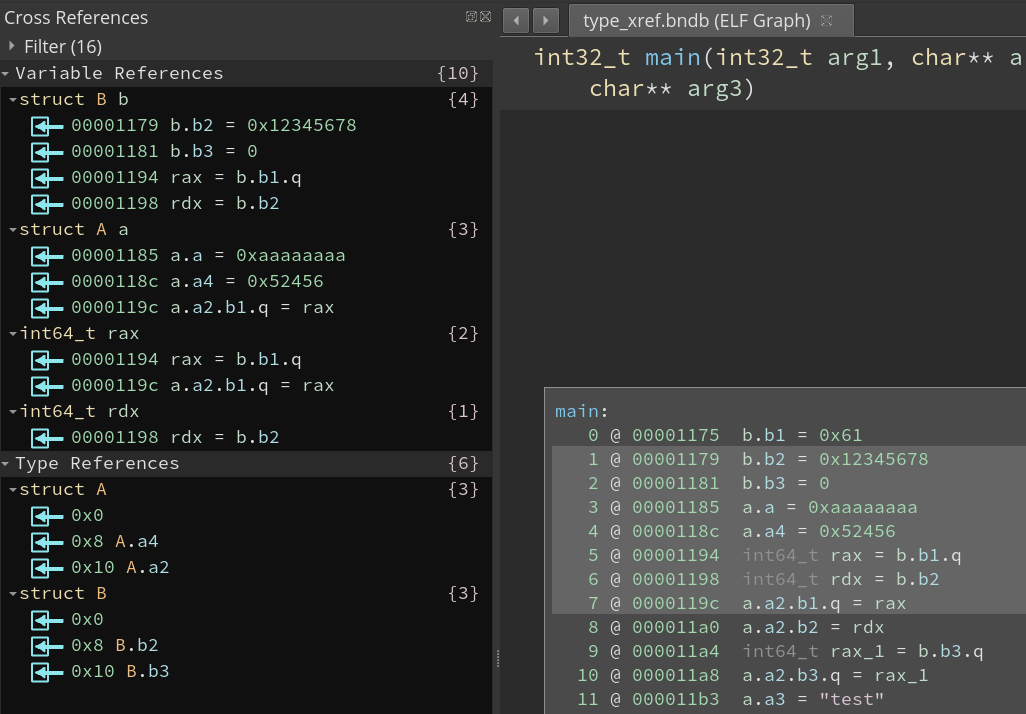 Since the API is such an important part of BinaryNinja, this blog would be incomplete without covering the Python API changes related to the variable and type xrefs.

There are many new functions added, even I don’t remember all of them! One good place to get a list of them: the unit test! Its open-source and can be viewed here.

For variable xref, there are four functions:

For outgoing type xrefs, use the following two:

Despite the many APIs, their usage should be self-evident from their names and of course you can always just remember the following API documentation wildcard search to find them all again: [get_…refs](https://api.binary.ninja/search.html?q=get*_refs&check_keywords=yes&area=default#).

I hope you like the two features so far. Although we believe they are usable and will benefit our users, we still have future plans for even further improvements. Some of them are:

Please give these new features a try, and feel free to offer bug reports and suggestions!