Local Privilege Escalation 0day in PsExec Gets a Micropatch 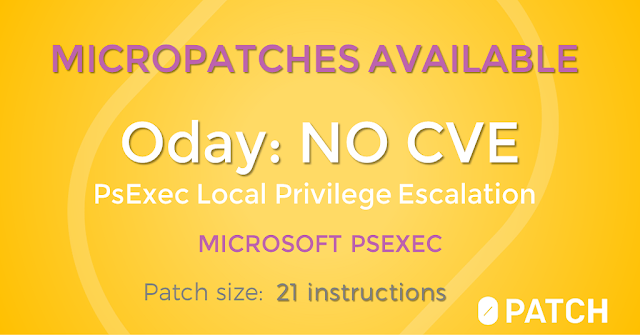 Last month, security researcher David Wells of Tenable published an analysis of a local privilege escalation vulnerability in PsExec, a powerful management tool from SysInternals (acquired by Microsoft) that allows launching executables on remote computers.
It would be hard to find a Windows admin who hasn't used PsExec at some point in time, and just a tiny bit less hard to find one who isn't using it on a regular basis. Granted, some may not even know they're using PsExec because it's integrated in various enterprise tools - tools like JetBrains TeamCity, which is getting a lot of attention for suspected involvement in the SolarWinds supply chain compromise.

The vulnerability is a pretty classic named pipe hijacking (a.k.a. named pipe squatting). When PsExec tries to launch an executable on the remote computer, it creates a temporary Windows service there using PSEXESVC.EXE which it extracts from its own body, launches that service under Local System user, and connects to its named pipe to provide it launch instructions. PSEXESVC.EXE creates the named pipe with permissions that don't allow a non-admin or non-system user to connect to it, which is good because otherwise any user could instruct the service to run arbitrary executable as Local System.

Now, the attack comprises a malicious local process creating a named pipe with the same name as PSEXESVC.EXE uses, only before the service creates it. PSEXESVC.EXE, running as Local System, subsequently tries to create the same named pipe, but merely re-opens the existing one, leaving its permissions intact. At that point, attacker can connect to the named pipe and make the service run anything.
David has provided an elegant proof-of-concept for this vulnerability.
So which systems are at risk by this issue? Basically every Windows machine that admins remotely launch executables on using PsExec (or management tools utilizing PsExec) if the machine already has a non-admin attacker there trying to elevate their privileges.


At the time of this writing, there is no official patch available from Microsoft. PsExec.exe, and PsExec64.exe, which encapsulate the vulnerable PSEXESVC.EXE, are part of the PsTools suite, and were last updated in June 2016. According to Tenable's write-up, PsExec versions from 1.72 (built in 2006) to the latest version 2.2 (built in 2016) are all affected, meaning that the vulnerability has been there for about 14 years.
Note that PsExec is not part of Windows, and is also unlikely to be patchable with Windows Updates as it doesn't even have a designated installation location (one can just copy it anywhere and use it as a standalone executable). PsExec also doesn't have its own integrated update mechanism, meaning that while Microsoft can issue a new, patched version of it and put it on their website, all the vulnerable PsExec's out there will remain vulnerable until admins manually replace them with this new version.

Let's see how the relevant part of PSEXESVC.EXE looks where named pipe is created and connection requests accepted. 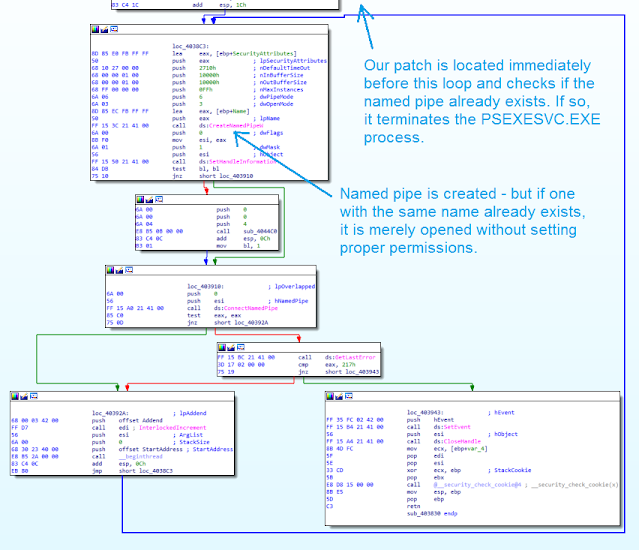 Function CreateNamedPipe is being called in a loop, each time waiting for an incoming request, spawning a new thread to process that request, and repeating the loop.

When fixing named pipe hijacking/squatting vulnerabilities, the obvious approach that comes to mind is using the FILE_FLAG_FIRST_PIPE_INSTANCE flag in the CreateNamedPipe call, which only allows the pipe to be created if it is the first instance of the pipe. We actually tried this approach but while it stopped the attack (as attacker's pipe was the first instance), it also broke PsExec because in the above loop, when the first request is accepted and sent for processing, a new instance of the pipe gets created - which is no longer the first instance.
So we went for the second best option - checking for existence of the named pipe immediately before the loop. We used a call to CreateNamedPipe with FILE_FLAG_FIRST_PIPE_INSTANCE to determine if a named pipe with this name already exists - and if so, we immediately terminate PSEXESVC.EXE, logging an "Exploit Blocked" event in the process.
Our micropatch has only 21 CPU instructions and should be easy to understand for anyone knowing x86 assembly and Windows API functions:

Here's a video of the micropatch in action:


According to our guidelines, this micropatch is immediately available to ALL 0patch users for absolutely no cost. Note that no computer restart is needed for installing the agent or applying/un-applying any 0patch micropatches.

Q: Can we easily deploy this patch to multiple computers?
A: 0patch Agent supports silent (unattended) installation with auto-registration, and central management via 0patch Central. Please see User Manual for details and ask [email protected] for an Enterprise trial.

Q: Will the micropatch also fix PsExec that is integrated into our enterprise product?
A: As long as PsExec used by the product is version 2.2, our micropatch will fix it. But again, 0patch Agent must be present on computers being managed by the enterprise product, not on the machine where said product is installed. If your enterprise product is using another version of PsExec and you cannot replace it, please contact [email protected].
Q: Is there any other way to prevent exploitation of the described vulnerability?
A: Not to our knowledge. Until Microsoft issues a fixed version of PsExec, ours is the only patch that exists.

Q: Is this vulnerability a big deal?
A: Depends on your threat model. This vulnerability allows an attacker who can already run code on your remote computer as a non-admin (e.g., by logging in as a regular Terminal Server user, or establishing an RDP session as a domain user, or breaking into a vulnerable unprivileged service running on the remote computer) to elevate their privileges to Local System and completely take over the machine as soon as anyone uses PsExec against that machine. For home users and small businesses this is probably not a high-priority threat, while for large organizations it may be.

We'd like to thank  David Wells of Tenable for their excellent presentation of the vulnerability and an elegant proof-of-concept, which allowed us to create a micropatch.

While you're here: If your organization has Windows 7 or Server 2008 R2 machines with Extended Security Updates and wouldn't mind saving lots of money on less expensive security patches in 2021 that don't even need your machines to be restarted, proceed to our New Year's Resolution. The same applies if you're still using Office 2010 and want to keep patching critical vulnerabilities now that support has ended.

To learn more about 0patch, please visit our Help Center.