How Online Gamers Can Play It Safe 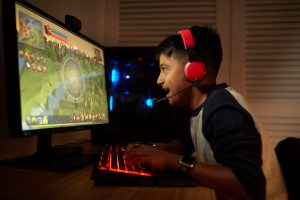 Online gaming has grown exponentially in recent years, and scammers have taken note. With the industry raking in over $100 billion dollars in 2017 alone[1], the opportunity to funnel some money off through fraud or theft has proven irresistible to the bad guys, leaving gamers at greater risk.

From malware and phishing scams, to phony game hacks, identity theft, and more, gamers of all stripes now face a minefield of obstacles online and in real life. So, if you’re going to play games, it’s best to play it safe.

Here’s what to look out for:

Gamers who play on their computer or mobile device need to watch out for dangerous links or malicious apps disguised as popular or “free” games. Hackers often use innocent-looking downloads to deliver viruses and spyware, or even sign you up for paid services, without your consent. In one prominent case, more than 2.6 million Android users downloaded fake Minecraft apps that allowed hackers to take control of their devices.

Researchers have even discovered a ransomware threat that targets gamers. TeslaCrypt was designed to encrypt game-play data until a ransom is paid. Originally distributed through a malicious website, it has since been circulating via spam.

And while it’s true that game consoles like PlayStation and Xbox aren’t as vulnerable to viruses, since they are closed systems, that doesn’t mean that their users don’t face other risks.

Players on any platform could wind up with malware, sent directly from other players via chat messages. Some scammers use social engineering tricks, like inviting other players to download “helpful” tools that turn out to be malware instead. When you consider that 62% of kids play games where they speak to others, the odds of a risky interaction with a stranger seems quite real.

Players of the Origin and Steam services, for instance, were targeted by hackers posing as other players, inviting them to play on their teams. Over chat message, they suggested the players download an “audio tool” that turned out to be a keystroke logger, aimed at stealing their access credentials for the game.

Other social scams include malicious YouTube videos or websites, offering game bonuses and currency, for free.

Another widespread social threat is account takeover, or ATO for short. This is when a scammer hacks a real account in order to post spammy links, and scam messages that appear to come from a trusted contact. Some accounts, for games like League of Legends, have even been stolen and sold online for money because they boasted a high level, or rare skins.

Finally, be on the lookout for phishing websites, offering free games or bonuses, or phishy emails prompting you to login to your account, with a link leading to a copycat gaming site. Often, these are designed to steal your login credentials or distribute fake games that contain malware.

Players of the wildly popular Fortnite, for example, have been particularly targeted. The latest phishing scam is aimed at stealing the third-party sign-in tokens that allow cybercriminals to access a user’s account, and the payment details associated with it.

So now that you know about a little more about gaming threats, here’s how to win at playing it safe:

[1]According to The 2017 Year In Review Report by SuperData

The post How Online Gamers Can Play It Safe appeared first on McAfee Blogs.