But, what is a DDoS..? Is this kind of cyber weapon... Is this going to harm the digital world?

Let's find out how DDoS will affect enterprise safety, and how we can mitigate them...

This blog is intended to build a tool that simulates and helps mitigate the DDoS attack. In less than a decade ago, DDoS was a reasonably straightforward cyber-weapon with which the attacker sends a large number of requests to paralyze a web server and shut down online services. Over the years, as the Internet has evolved rapidly in terms of bandwidth and technology, DDoS attacks are no longer just a nuisance.

Nowadays, apart from being gigantic and more advanced in complexity, they are increasingly being employed as part of a more complex hacking plot— often targeting the sensitive or critical customer information, like credit card data, and even real money.

As an organization, whether it be big or small, relying on continuous presence online. The impact of such big mainstream attack can cause network, server or applications the downtime, degrading their performance with its bundle of risks added in it.

While certain on-premise appliances can take small-scale attacks to an extent, they may not mitigate large-scale and complex attacks at different layers of the network. Whether it be any size of the organization, a sudden traffic spike may overload the systems; even it is a service provider due to insufficient dynamic bandwidth.

To keep the business with its services running and giving the customer their uninterrupted responsive application, we propose to develop a tool or simulation engine over a Dynamic Security Framework. This tool can simulate various DDoS attacks and have a capability to Monitor, Detect and Mitigate DDoS.

But, What is DDoS?

In its most straightforward form, Denial of Service (DoS) is a deliberate attack on any system components to degrade its normal working process. It may be directed to specific OS, port or service to the target system, to a network, to a firewall or any other components and environment.

Distributed Denial of Service (DDoS) attack is a DoS attack that occurs from more than one source, to/from more than one location, in one or more forms simultaneously. Regularly, the DDoS assailants don't know that they are taking part in a DoS assault against a site, and are hoodwinked into joining the attack by an outsider.

This blog provides an overview of the common types of DDoS attacks, the negative impact of DDoS attacks on business, and mitigation steps to reduce the impact ratio of the DDoS attack on the system.

The vulnerabilities of the Open System Interconnect (OSI) layer are a doorway to variations of DDoS attack, starting from Layer 1 climbing up to Layer 7. But the most common attacks that we see on the OSI are at layer 3, 4 and layer 6,7 which are known as Infrastructure layer attack and Application layer attack respectively.
DDoS Attack Categorization
DDoS assaults are a developing risk to endeavors and associations depending on continuous online nearness. In its most local shape, the assailant surges the objective server or system by sending monstrous solicitations to soak arrange limit or fumes organize assets, with the goal that real clients are denied get to. Bigger, increasingly advanced DDoS assaults are regularly planned by the assailant behind botnets, or systems of trade-off PCs or gadgets. DDoS assaults can be extensively separated into three general classes:

It is essential to take note of that while most basic DDoS assaults extensively fall into these three classifications, a few assaults can likewise be a mix. For instance, the ongoing assault on Dyn's DNS foundation was a blend of an application and convention assault on DNS administrations that ventured into a volumetric assault. It is likewise vital to specify that while a few assaults focus on the DNS framework specifically, others can utilize DNS as a way to trigger an assault.
Impact of DDoS Attack
The impact of DDoS attacks can be devastating, especially if the organization or business relies heavily on uninterrupted online presence to maintain e-commerce business, online operations and/or brand equity. Unprepared for such threats, a sudden attack could cause direct revenue and customer loss, damage to brand and reputation, and incur extra costs in taking remedial actions.
Revenue Loss
Your clients will be vexed about your site and administration on the off chance that they have to hold up a while to stack the page or access to its applications, which thusly will debilitate them from paying for your item or conversely benefit once more. In the event that web-based business—anything from online toy store to security, exchanging stage— is your real income source, downtime causes coordinate income misfortune and it could be gigantic, taking into account the income misfortune amid the downtime and the reputational harm, consolidating negative expression of word and client disappointment, going ahead.
Brand Loss
While income misfortunes caused by downtime can be determined, the tarnished reputation is increasingly hard to measure. Past that, keep in mind that first-time guests, who were denied access to your site, were disinterested and the chance is they will stay away for the indefinite future. Existing clients are likewise prone to change to another merchant or specialist organization, particularly if the business is exceptionally aggressive, where items or administrations are to a great extent homogeneous (think about stock exchanging). On the off chance that you a specialist co-op that has benefit level assertions for uptime, you might be liable to penalties.

Data Loss
As known the DDoS is an attack that degrades the performance of the online process, it's a mere distraction by an attacker to compromise the system to steal the data. Small businesses are likely to lose data due to a DDoS attack—31% of SMBs reported data loss, compared with 22% of enterprises. The damage scope of such attacks goes far beyond the temporary downtime of a corporate website. Companies report total disruption to their operations, and in some cases—loss of sensitive data.
DDoS Mitigation
DDoS attacks are becoming the most prevalent type of cyber threat as a mainstream attack and they have grown rapidly over the years with changing technology. Though we don’t have a single approach to cover all DDoS risk, we can take multiple measures to prevent or minimize the risk. This is a small attempt to reduce the attack ratio by building a DDoS Simulation Engine with a capability to Monitor, Detect and Mitigate DDoS. So we plan to integrate the simulation engine over a dynamic security control framework.
The distributed nature of DDoS suggests a distributed mechanism is necessary for a successful defense.
Three main DDoS defense functionalities -

As we speak about the auto-learning before and after, the 5 step process is a mandatory procedure to mitigate and evolve with the growing threats and combinatorial attacks.
The Automation process would carry out the following :

Detect level -focused on being able to pinpoint abnormal behavior


Respond level -focused on responding in case of a DDoS attack 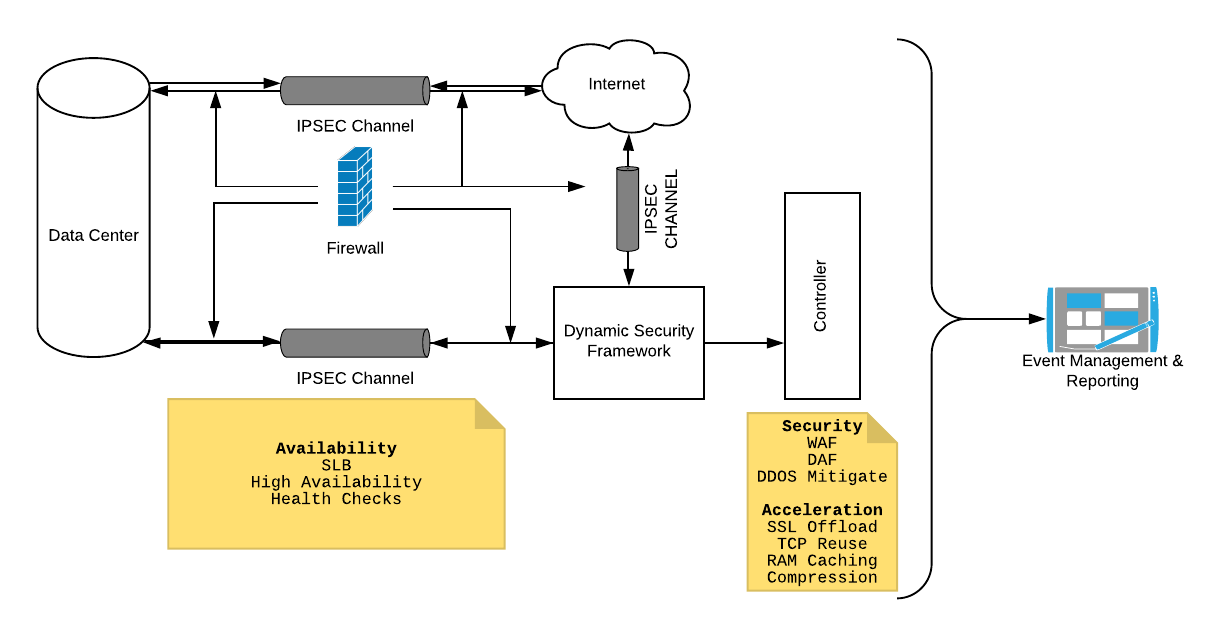 The dynamic security framework configured over data centers and servers of the different organization over a secure channel maintained by a firewall help in the following:


We plan to build a controller with the following features


Where all these parameters can be monitored over an Event Management & Reporting which allows you to consolidate all management tasks into a single pane of glass making it simple to apply consistent policies across all your DDoS devices.

Security administrators can view a dashboard of DDoS attacks in real time, with a wide variety of policies and thresholds at your fingertips, regulate traffic and block suspicious activity with fine granularly.

Generally, many security computation algorithms exhibit a trade-off between QoS and Execution time. For example, a firewall can be properly configured to drop only illegitimate traffic which can be generalized as Deep Packet Flow Inspection (DPFI).
So we propose a recursive flow model by analyzing and filtering illegitimate traffic flows from legitimate traffic flow this will prevent malicious packets from impacting the QoS performance while allowing legitimate traffics to complete appropriately. A firewall with two distinct components Traffic Anomaly Detector(TAD) and Guard alert trigger work together to deliver complete DDoS protection for virtually any environment.
This purification process consists of 5 modules :
In context, between any DDoS attacks, the model will be in learning mode, passively monitoring traffic patterns and flows for each of the different resources it protects to understand the behavior of the system. Later used to fine tune the system to recognize and filter known and unknown attacks on real-time network activity.
As known DDoS can affect every layer of the OSI model,  let us see how we can have a mitigation plan to patch the attack types of internet cookies before the organization can take a huge hit.

Advantage:
Advantages of having this engine on the dynamic framework,
Growth: Scalability with respect to network growth.
Intelligence: Active mitigation capability.
Latency: Rapid DDoS response.
Deployment Ease: can be deployed at least adjacent to the router, switches over a framework.
Conclusion
For any association depending on continuous online presence, DDoS assault causes coordinate income misfortune, client misfortune, increment costs, and can harm their notoriety medium-term. Assailants these days utilize many hacking and attack methods to carry out increasingly serious digital crimes. So, to the extent we practice and evolve with the right architecture we are to be protected by such attacks.
Here is a small effort to build the right system with the right policies.