Beyond Digital: How Social Media Can Lead to Physical Threats Towards Brands 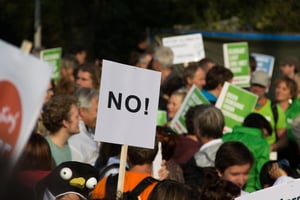 It’s like something straight out of a bad action film: someone slips information on Twitter stating that they are planning a bank robbery or threaten an organization with a bomb.

In the golden years of the internet, threats would happen all the time on forums and messengers, and with the rise of social media it’s easier than ever.

While these particular situations are less likely to be genuine, more so a poorly thought threat, there are plenty of real-world scenarios that we have seen that can in fact pose a physical risk to brands. For our first we take a look at how an executive’s posting on Twitter helped lead to a protest, and in the second how a well known celebrity posting on Snapchat resulted in a robbery.

Scenario One: Protesting an Executive

For better or for worse, executives can often become the target of malicious activities. For someone like Elon Musk, his Twitter account is often the target of digital currency scams whenever he tweets. For others, their social media habits can lead to other trouble. Because of this, if an executive, say for instance Martin Shkreli aka ‘Pharma bro’, were sharing rather negative opinions that in turn led to backlash, his own posts could work against him.

In Shkreli’s case, the tweets he was sharing, the same ones that eventually getting his account suspended, built up such a following of negativity, that it led to quite the backlash. In one particular case where he was set to speak at Harvard University students organized a protest, including a false fire alarm, in an effort to disrupt the event. Much as social media played a part in Shkreli’s following, it’s just as likely that the students who interrupted and protested the talk also organized it all through social media.

Have you ever tried to find information about another person? In this age of Tinder dating, LinkedIn profiles for applying to jobs, and the paper trail we leave on social media every day, it’s incredibly easy to find private information on just about nearly anyone. For an executive within an organization, this can mean numerous things, everything from a sales person tracking them down in an effort to sell their services or something more malicious. Whether the executive is sharing too much private information themselves or their family or friends are doing it, this can lead to potential threats.

When Kim Kardashian was robbed at gunpoint of nearly $5 in jewelry and other items, she believes it was because of her use of social media.

“There was probably a group of guys that were following us the entire trip,” Kardashian stated. “I was Snapchatting that I was home and that everyone was going out. So I think they knew Pascal [her bodyguard] was out with Kourtney and that I was there by myself. They had to have known we were leaving that day. They had this window of opportunity and just went for it.”

Although this has not been fully confirmed, Kardashian feels that the circumstances and the details shared through Snapchat led to the robbery. Just like this specific example, any oversharing or geo-tagging can lead to physical threats if there is a threat actor targeting them.

In our first scenario there is little to be done when an executive has a negative set of opinions that could impact business; however, with a proactive monitoring solution in place, being able to identify a protest in the making is completely feasible. The second scenario also could have benefited from monitoring as Kardashian’s post about being alone and at a specific location was a huge red flag. Regardless of the circumstances, digital events can lead to physical threats; however, with the proper training and monitoring in place, risk can be reduced or nearly eliminated.