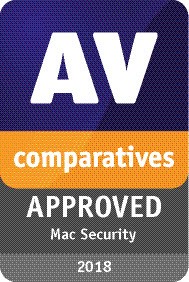 Despite popular opinion otherwise, the days have long since passed when Mac users can venture forth on the Internet without having to worry about viruses or ransomware, phishing attacks or dangerous URLs. Though the number of attacks on the Mac are fewer than those on Windows machines (because there are fewer Macs, of course, making less of a target for cybercriminals), antivirus protection is still advised for every Mac user’s safety when browsing or shopping online or on social networks such as Facebook and Twitter.

Because that’s true, wise users will be glad to hear that Trend Micro Antivirus for Mac achieved 100% antimalware protection and received a badge of Approved Mac Security in the latest Mac Security Test & Review by AV Comparatives, completed in July of 2018. Among a crowd of 10 antivirus programs tested for the Mac, Trend Micro Antivirus for Mac scored 100% protection, with no false positives—not only against 310 current Mac malwares, but for 1,000 Windows samples as well. That means: if your Mac is included in a house of Windows machines, you can’t be a conduit for Windows malware even if you’re sandwiched between two PCs as you pass your family’s files back and forth.

AV Comparative’s tests included different phases in the process of malware detection: USB flash drive insertion, real-time detection, on-demand scanning, and malware sample execution. No malware got past Trend Micro Antivirus for Mac to infect the machine—and again, no false detections occurred. Highlights of the review include examination of Folder Shield for ransomware protection; Privacy Scanner for checking your privacy on Facebook, Google Plus, Twitter, and LinkedIn; Web Threat Protection against fraud and malicious software; and the Website Filter with both pre-sets and custom settings for Parental Controls.

Visit AV-Comparatives’ Mac Security Test & Review 2018 to download a PDF of the review.

Visit Trend Micro Antivirus for Mac for more information, or to buy the program.