A deep dive into SoWaT: The paranoid router implant used by APT 31

APT 31, aka Zirconium, is an interesting Chinese threat actor, operating almost separately any other Chinese TA. The group is targeting various types of targets of interest to the Chinese government. Notably, the group has been subject to several governmental attribution statements, including Germany, France, Norway, Australia.

Sekoia published on the 10/11/21 a great report expanding on previous report by the French ANSSI, The timeline above was copied with permission from them.

It is long known that APT31 is using ORBs (Operational Relay Boxes) for their network operations, specifically hacked routers. Still, there is no public research into how they are operate those ORBs. With this reports I try to shed some light into the groups capabilities on network devices and potential detection and prevention options.

SoWaT checking how far off the clock is

The implant, I dubbed “SoWaT” because of its use of the custom file called “swt”, is an ELF file for 32-bit MIPS based processors. According to the research done by Sekoia, it was most likely used for Pakedge routers, as they represent the vast majority of attacked routers and often run a Linux based OS on MIPS32 processors.

The implant was first mentioned in a tweet by billy leonard as a router implant found by google TAG team and was attributed to APT 31. Sekoia reaffirmed that attribution in their report

SoWaT communicates with the attacker using TLS, where it can function as a client or as a server, If the implant has a command line argument it start a server on the port given. Regardless of that, it tries to connect to a list of servers specified in its encrypted configuration (See Configuration File) every hour.
Some functions of the implant can only be run if the implant is in server mode.

In both modes, the implant uses certificates and keys parsed from “swt” (See swt). The CA keys to the chain to authenticate the attacker and uses the public and private key for its own.

All components of the TLS connection are implemented by the popular library mbedtls. The specific settings of SoWaT cause the connection to have a unique JA3 and JARM signature, see IOCs.

Interestingly, The main execution function of SoWat isn’t exclusively used to execute command from the attacker but also called from withing the implant itself. This way complicates understanding . Functions in bold are function which were most likely intended to be used by the attacker.

After the TLS connection is successful, SoWaT waits for commands.
Any message needs to have the following basic structure:

All Network protocol structures from here forward are in big endian.

According to the Message size, the implant allocates data and waits for all the data before executing the command.
The are 16 possible commands:

Functions in bold are also called by the implant itself.

This command switch place can be confusing, as it combines both function called by the implant for itself and also function that can be called by the attacker. Moreover, some of the function seem to be largely overlapping, most likely because of code added in different parts of the development. The RAT and Proxy functions have their own section, I will describe here other notable functions:

The function expects a buffer containing 482-byte long chunks of data detailing a connection to initiate, with the following structure:

The function is called hourly by the implant. It checks whether there were any successfull connections to the implant in the last 24 hours and if there weren’t it calls Function 17. It is unlikely that the function is intended to be called by the attacker directly.

This killswitch tries to delete any artifact of the malware: it deletes the entrie current working directory and runs swt to revert any opened ports. 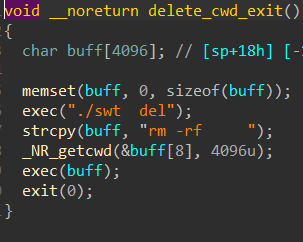 As you can see, the functions are quite simple. Of some interest is function 2, which writes to a file named “s” in the current working directory. I have not seen any other reference to that file

This is the message fromat for the verification:

The verification process occurs as follows:

Only if the message is verified the command is ran,

The names of the modes comes only from reversing their internal logic and and analysis of potential uses. While the Attacker <-> Victim mode is quite clear, the Attacker <-> Attacker mode is complicated and it is possible that its purpose is different, though it still works in the way detailed below..
In both modes, the command data needs to to be encrypted using the private key of the client (which it also used to verify itself in the TLS handshake).

The command data, before encryption, is structured in this way:

I have written a script which can connect to SoWaT and perform as both sides of the proxy, See Scripts. 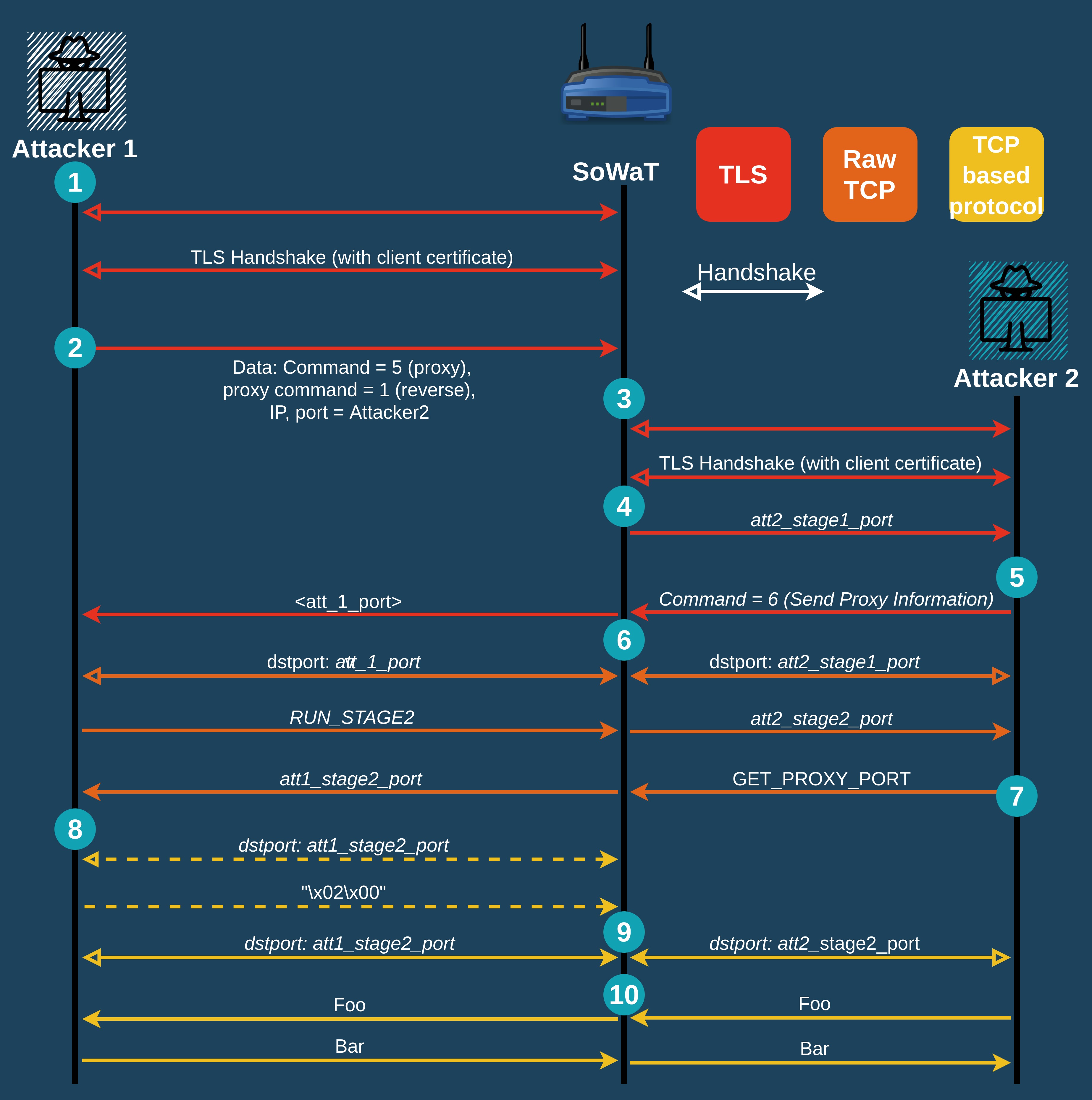 As In the previous mode, steps 6 onwards can be done by a third attacker and do not need necessarily to continue with A1 which initiaited the proxy command.

But why so complicated?

I do not have a definite answer as to why the proxy intiation process is so complicated, expecially the attacker <-> attacker mode. Two Hyptotheses:

The implant, available on Virustotal, is an ELF file compiled for the MIPS processor architecture. The ELF is statically linked, with the libraries uClibc, libec, mbedtls, libc-ares and potentially others. While the code is in no matter obfuscated, the stripped binary complicates reversing.

SoWaT assumes a configuration file encrypted using ChaCha20 protocol named “conf” in its current working directory. The file needs to be exactly 386 bytes long, and constructed in this way:

Nonce – Some 12-byte random value which serves as salt for the chacha20 encryption. See ChaCha.
Buffer size – size of the entire structure, in big endian.

The Configuration is decrypted using the following hard-coded key:

There are up to 10 IP,Port couples, which represent each an attacker-controlled server the implant may try to connect to.
The structure of the configuration is probably due to compatibility reasons. it is possible that the first 260 bytes were once used to sign the configuration, as that exact buffer length is used in other places for verification.

The implant depends on a file named “swt” located also in the current working diretory.
I am not in possesion of that file but from examining SoWaT’s use of it is clear It contains a CA certificate, and a signed server certificate and private key. Moreover, it’s also an executable file. From context, it has likely some functionality which opens ports in the router’s firewall or changes its routing so to allow SoWaT to listen to incoming connections in a custom set port.

In order to open a listening socket the implant has a specific procedure: 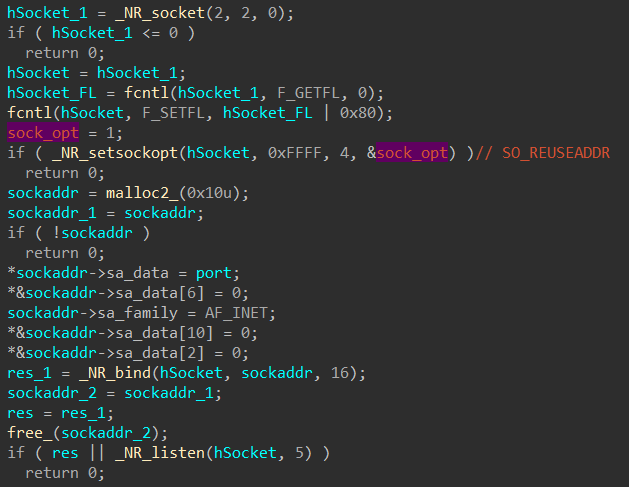 The implant contains a lot of dead code, which bears resemblance to the malicious code ran. Most likely, this code was used in a previous version of the implant and was included because of compilation flags.

The implants’ function and architecture show a comprehensive and advanced codebase, relying on many custom structs, and running different tasks simultaneously.

The implant contains very few custom strings, which is quite unusual in router malware, whose developers are less afraid of detection and analysis.
The appearance of strings in an unsystematic way, and the use of status codes may hint that the threat actor has been detected and analyzed in the past and changed their implant to avoid detection.

The implant doesn’t give any direct hint to how it was executed. Upon deeper inspection, the string “Usage : ntpclient destination” stands out. which is referenced by a basic print_usage function. This function is never called. Most likely, it is an artifact left by accident by the Threat actor.
The executable lacks the functionality of every ntpclient, i.e. setting the time on the machine, so it was not possible for the implant to masquerade as a that.
It is possible that previous versions of the binary replaced the original ntpclient and so would be started as a daemon, running ntpclient functionality along the malicious functionality. Alternatively, is is possible that the executable was just named ntpclient and the Usage was there to try make it look legitimate to a suspecting IT technician.

In the directory the implant is run from 2 files are expected:
“swt”
“conf”

When a kill command is sent, the malware deletes its entrie current working directory, this means that it’s likely the attacker dedicate an empty or new folder for their implant

I can assess with high confidence that SoWaT has had several developmental builds before, for the following reasons:

It is likely that SoWaT is also deployed to other router vendors or linux based servers:

Throughout the research of the sample it is clear that the developers paid much attention to encryption and verification. Several remarks on that:

As of the time of this writing, the original implant sample was detected by 33 out of 61 AV engines in VT.

Uploading the same sample, with some strings deleted, but fully functional yielded very different results: only 6 AV vendors detected most of these samples.
Essentialy, this means all but the 6 AV vendors are highly unlikely to detect the next SoWaT implant.

The 6 AVs that have shown consistent detections are (in alphabetical order):